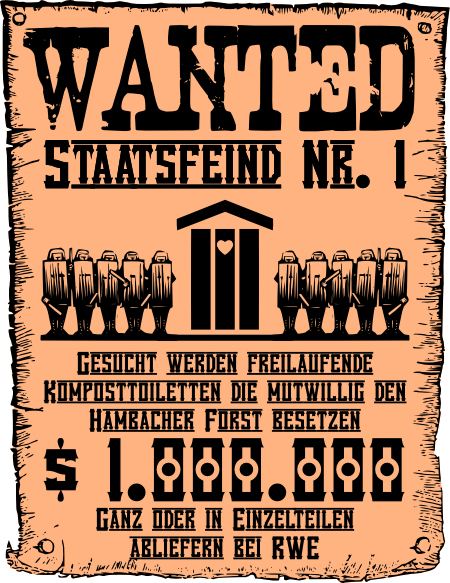 Complete or in component parts
to be delivered to RWE”. 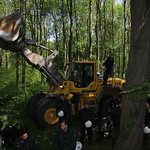 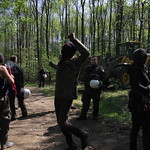 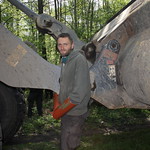 12 activists arrested and several injured during the demolition of the compost toilets in Hambacher Forest in Germany.

A hundred riot police officers, mounted police, and security personnel of the RWE energy corporation arrived early in the morning (23.4.2014) with bulldozers and diggers in order to demolish the compost toilets and infrastructure of the protest camp.

The activists climbed on trees, constructed blockades, and protested with music and clowning. One activist chained themself to a bulldozer with a lock-on tube, thus stopping the whole convoy for four hours. Police brutally attacked the protesters. One activist was hospitalized with a concussion after police repeatedly hit him on the head.

„We wonder why the police invests so much energy and resources in the destruction of sustainable toilets when 500 metres away lays the biggest shit-hole in Europe,“ said Ginger and Clowney after their arrest.

Hambacher Forest was occupied since April 2012 in protest against the expanding open-pit mine Hambacher Tagebau, the largest CO2 producer in Europe, owned by RWE. The occupation has been delaying the continued destruction of the ancient forest.

A few days ago an article appeared in the local mainstream media claiming that activists harrass passersby and smash police and company vehichles.
„Three days before the official re-occupation of Hambach Forst, RWE and the police are looking to intimidate and criminalize the activists. The mainstream media is very willing to support this cheap propaganda,“ said the activist Isabell Schwarz.

The activists faced several evictions, but have immediately re-occupied. The last eviction was at March 27th, but a public re-occupation is planned for April 26th.

The Earth First! Journal published an extended Interviewon the Hambach Forest, the eviction, the re-occupation and the protest in the Rhineland.

Please feel free to subscribe their newsletter to be in solidarity with our friends at the EF! Journal and also up to date with “direct actions in defense of living systems”!

Continue Reading „We oppose all this shit“ Interview with the EarthFirst! Journal

On Friday, 11th of April 2014, a very well attended Infosession in Chapel Hill/NC (US) took place. 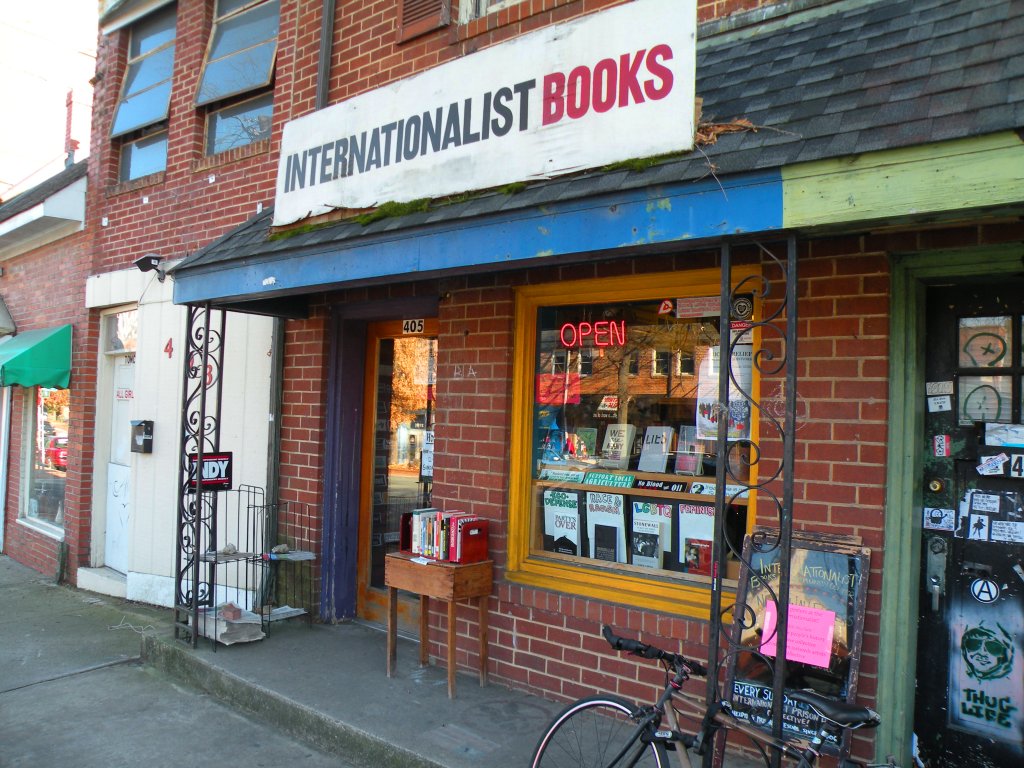 At the “Internationalist Books & Community Center” some two dozen people mingled and besides the Info-session a Q&A did happen concerning the current situation of the movement in the Rhineland – which did lead to more than 3 hours of information, exchange, discussions and questions.

We are so freakin’ pleased about this networking and sympathy and we send greetings of solidarity and love to all our comrades and friends everywhere out there – and today especially to Chapel Hill!