The demonstration that was banned by the police attracted over 50,000 people celebrating the second year in a row when cutting has been legally blocked by Bund (German Friends of the Earth) court case as well by thousands of activists turning up to defend the forest and resist RWE opencast mining.

As forest communities one after another have been demolished, new tree houses and occupations and their extended defenses have been popping up like mushrooms after the rain: Fendria, Ghostown and Paragraph 11.
P11 and Ghostown have been surrounded by all around barricade-like walls, with inside a village like community of ground blockaders with kitchens, supply storage. P11 has areas protected not just by one perimeter of rampart walls,

When not just one but millions of lives are taken by coal particulates, climate change and repression, even to those proactively resisting those destructive and deadly dynamics those lives seem rather distant as if an important but almost as if a statistic. It is a different matter altogether when that life that perishes is one of one that you have known, shared meals and stood on the front-line with.

Continue Reading Response to The Tragic Death of Our Comrade 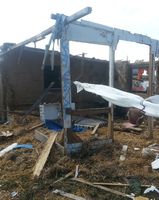 This was a house before the so-called securing of evidence. Click for an enlargement

Regardless of, and perhaps especially because of the now 3 weeks of massive police actions: barricade clearings, constant harassment, arrests (now of 26+ all but 2 now released) meadow raid and confiscations, and now the information that large police action might be planned for this Wednesday the response to all this Climate Killing Bullshit has just been freaking phenomenal.  Supporters have been constantly streaming in and despite the searches, bringing over a ton of eviction food and supplies (with tools, pallets and climbing supplies being stolen by the co2ps).  Hundreds have visited, stayed and supported regardless of constant harassment even of the official protest Mahnwache, access to which is “legally” guaranteed without id checks and controls (those pressing this issue have been able to get in without being checked, others have just given their names without presenting ids). Also please remember that the forest is large so it is really hard to cut off all access from outside…

There has been mobilization of countless local support groups, initiatives, and even, yes, NGOs taking on the cause of Hambacher Forest, still more people packing their backpacks and joining the struggle would be good as well.  There has also been explosion of articles and reportage from the forest, all with the exception of local coal press being fairly positive.  This however does not change the fact that the escalation to push the Planet past catastrophic 2 degree climate warming and the run away global warming points of no return continues with at least 6 police vans posted around Hambi trying to control people coming to the forest and evictions and cutting of last portion of the forest being in the works regardless of the official Kohle Kommission coal exit narrative.

So counter balancing possible thousands of Co2ps  on the could be in the forest on this very same day is a valid climate justice and grass roots strategy.  One that can especially lift up the morally and spirits of the forest activists facing police violence, destruction of their homes and of their beloved unique on European scale habitat…

#HambiBleibt #HambacherForst: Please use those hashtags on twitter with updates on the situation from the demo and in case Fossil Fool Herbert Reul’s Co2ps attack Hambi excerpting the highest violence ever extended to all life on this planet, destabilizing the climate and future of the only life bearing world.

train schedules for the demo from other cities: