Source:http://grenzenloskochenhannover.blogsport.de/
The kitchen collective Düren informs: Friends of ours, the “No Border Train-Kitchen” are cooking for a week every day for 2,000 people at the Greek-Macedonian border in Idomeni. They send you greetings of solidarity and ask for your help:
No Border-Train-Kitchen, Idomeni

So it’s true after all! “Kernspaltung bei RWE” (“Nuclear fission at RWE”, sz): RWE today announced to want to split after all. As such, only a new “green” spin-off was announced. At noon the share price jumped upward by almost 10% and rose in the meantime by 16,69% compared to the day before.

Business with green power, electricity grids and distribution is intended therefore to be incorporated into a new company. Ten percent of this new, “green” company will then likely be brought to the stock exchange by the end of 2016 as part of a capital increase. […] The parent company however will in future concentrate on the conventional electricity production and energy trading. The recoverable assets for the nuclear power plants held by the group would thereby not be changed. (sz)

About the plans of the RWE Executive Board, the Supervisory Board shall decide on December 11th. On the basis of the expected results of 2015, the new company of RWE will achieve sales of more than 40 billion Euros and earnings, before interest, taxes, depreciation and amortization, of more than four billion euros. It is intended to take over almost 40,000 of 60,000 employees. (businessinsider)

Background is also the shareholder structure of RWE. While Eon is a listed public company with numerous investors, at RWE the municipalities do also have a decisive say. The North Rhine-Westphalian municipalities together hold almost a quarter of the RWE shares. (n24) 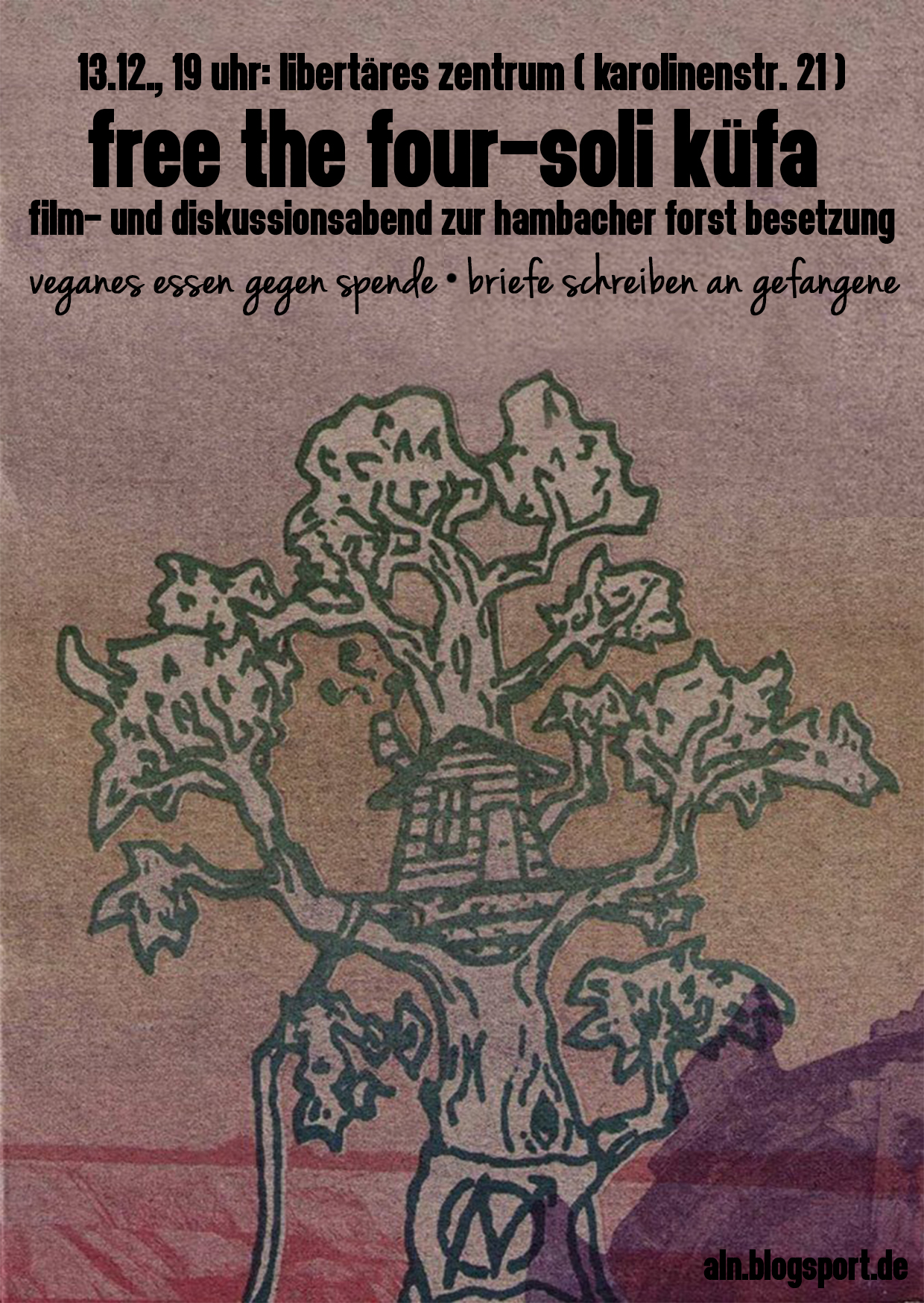 We (Animal Liberation Network) want, in the context of the LiZ-Küfa (Karolinenstr. 21) on dec. 13th from 7:00 pm, eat a vegan meal together with you and then show a 40-minute documentary on the Hambacher Forst occupation and provide space for a subsequent round of discussions, if you want.
There also will be the opportunity to write letters to the four activists to show them our solidarity from Hamburg too.

Moreover we will tell briefly about the current situation (deforesting season) in the Hambach Forest. more in German

Continue Readingfree the four – meal, film and discussion in Hamburg

Loading crane for lignite shipment blocked / Solidarity with the coal resistance in the Lausitz region, in the Rhineland and anywhere in the world / real climate comes from below!
A group of environmental activists, some of Robinwood, blocked on Friday 11/27 for six hours a sophisticated “Stirnkipp facility” in the harbor of Königs-Wusterhausen. Two of the activists rappelled down in the tilting area of the installation and rolled out a banner reading “Coal kills the climate!” In Königs-Wusterhausen the dirty lignite from Lusatia is reloaded from trains on inland waterway vessels, which then reach the Berlin power stations – especially Klingenberg in Treptow-Koepenick – by boat.

Continue ReadingClimate change? Do it yourself: stop coal power!