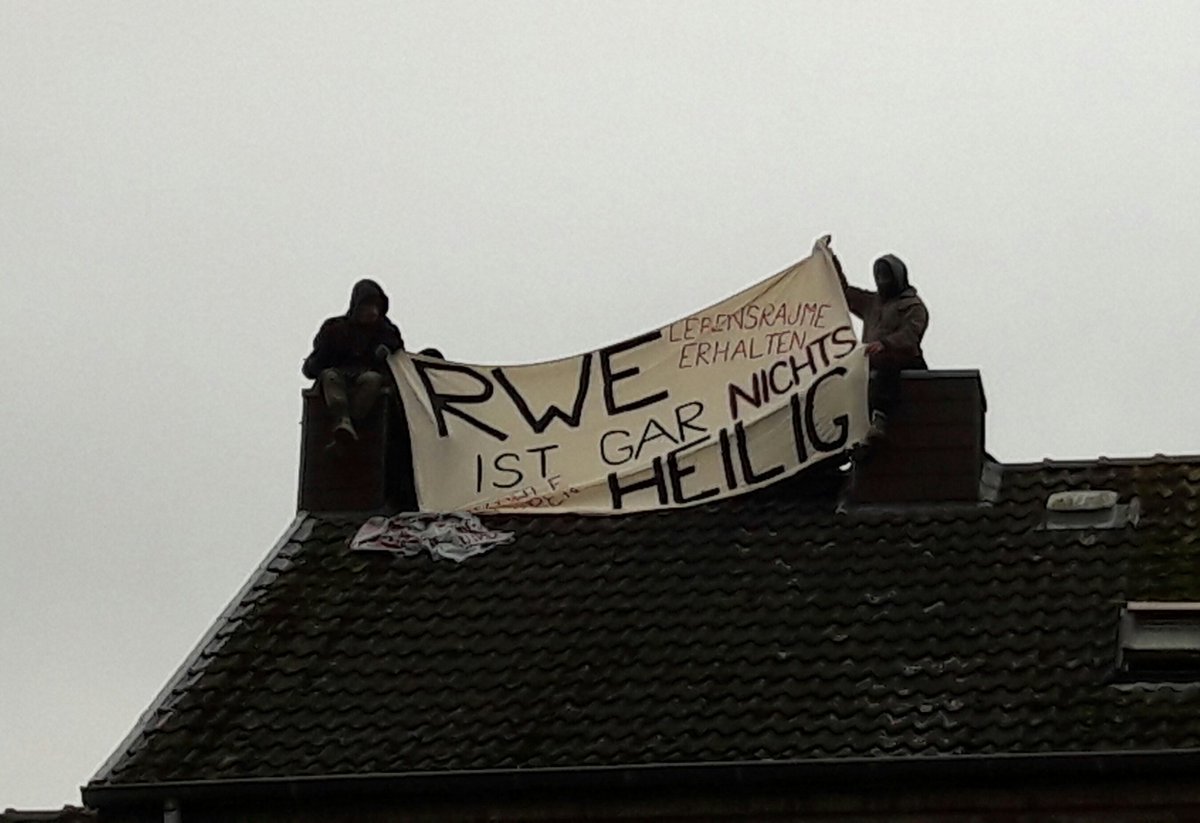 12:00 Meanwhile, the first tower is destroyed, rubble is cleared away.

Jan. 8
Reports:
https://www.youtube.com/watch?v=JjR7RSD3q6E
https://www.youtube.com/watch?v=7WPG-2X2gBg
Summary:
Since early morning, the cathedral was occupied by Greenpeace activists. Banners were unrolled, people locked themselves on in the cathedral. Two Greenpeace activists were bitten by a police dog early in the morning and hospitalized. Hambis were sitting on the roof of a neighboring house. There too, banners were unrolled. On-site observers reported that there probably would not be demolished today.
The demolition is scheduled for 2 weeks. It will begin on the main nave (altar side). Already yesterday, some hundreds of people were there and protested.

4:20 pm All previously arrested persons are free again!
2:20 pm 4 people were arrested. Police states that they have been brought to the Hückelhoven police station for ID treatment.
2:14 pm The demolition started

2:10 pm The occupants of the neighboring house left the roof
1:35 pm On Twitter, reports are piling up that the demolition is imminent, even though there are still people in the cathedral.
1:32 pm Although two activists are not yet removed, the machines are already started
1:15 pm The first activist has been evicted
1:03 pm Climbing cops arrived at the locked on activists
12:42 am Looks like the police operation is coming up. Police climbers have arrived.
12:22 am The occupation continues. From loudspeakers the former bells of St. Lambertus.

11.15 h Activists still keep both the house roof and the cathedral occupied. So far, nothing looks like an soon eviction #DomfuerImmerath #EndCoal #endegelaende #HambacherForst pic.twitter.com/sx00MSDt6v

11:00 Approximately 600 people are on site, 20 police vans. Police from the area is there and sees itself totally understaffed. There are no eviction preparations to notice. A manlift is there, but in a completely wrong place. Everyone is very relaxed except for the people of RWE.

A lot going on here in #Immerath. The Dom is still standing… pic.twitter.com/lT6T5HQNoF

Together against the old world! Join the Hambach Forest Occupation!

Hunters give up – RWE will take on the killing of animals in the area of Hambacher forst !!