This summer European anti-fracking movements are mobilising for action against fracking in Basque Country – close to the Spanish-French border, 500 km west of Barcelona. Anti-fracking collectives from several countries are calling on activists from across Europe to gather near Gasteiz-Vitoria for a week-long Frackanpada camp with actions and skill-sharing to organise our struggles in defense of the land, for social justice and for a sustainable society as well as developing our resistance against fossil fuel extraction and the underlying system of corporate profit and state evictions and repression.

The camp will bring together the people involved in the struggle against fracking from all corners of Europe, to share experiences and exchange skills; to put into practice participatory ways of social organising and visions of just alternatives; and to take action to expose and halt the practice of fracking. There will be a wide range of activities for everyone, from workshops and talks to films, activities for children and skill-shares. We want to learn about fracking, and share skills for resisting this industry from groups all over Europe and further afield, we also want to connect this struggle to other struggles against climate change, fossil fuel extraction, social injustice and other threats that our communities face. An open call for the camp’s programme is online and inviting proposals.

The location of the camp has strong symbolic meaning as a spot with plans for fracking. The camp is right next to a former drilling site which they want to expand for shale gas extraction. Frackanpada has the support from inhabitants of the nearby village, that allowed us to camp on their land. Local activists are clear that now is the time to re-escalate action in the region “The more numerous we are, the more it will cost them”.

Only together we can stop and resist their plans. It’s time to stop their nonsense. It’s time for action! No fracking here nor anywhere!

There will be a carpool. Send a mail to hfb-carpool _ riseup.net if you have a car and/or want to join!

Hey folks, the Winter is approaching it’s end ans a new spring with actions in and around the Hambach Forest is coming up. In the Forest Festival on 4th and 5th April 2015 we will celebrate three years of forest- and meadow occupations, and subsequently there will be another Skillsharing Camp from 6th until 12th April 2015.
We still have loads of flyers, placards, stickers and texts, which are waiting for a space in your infoshops and projects and would like to be distributed. If you want to have any material sent to you, send us an e-mail with the subject “infostuff” to hambacherforst@nullriseup.net. (Notice the German spelling!)
For further infos on the Skillsharing Camp, click here.
You can also download the flyers below in order to print them yourselves.

Let’s go to the Skillsharing Camp in the forest of Hambach April 6 – 12, 2015 / Germany-Cologne
Spring’s coming and the forest will wake from its slumber and the first greenery will be stretching towards the sun. The birds arrive and yet again forest of several kilometres of length and 200 metres of width has been destroyed.The “No tree will fall” campain, the wintertime and the seasonal deforestation are coming to a close. There were blockades, occupations, discussions, vigils, trials and detentions. By appearing in public and in the media and going into debate we have brought our rejection of technologies that are hostile to life, like gaining electricity from coal, into the open. Because it’s no use to hope for a different world, you must fight for it. More infos 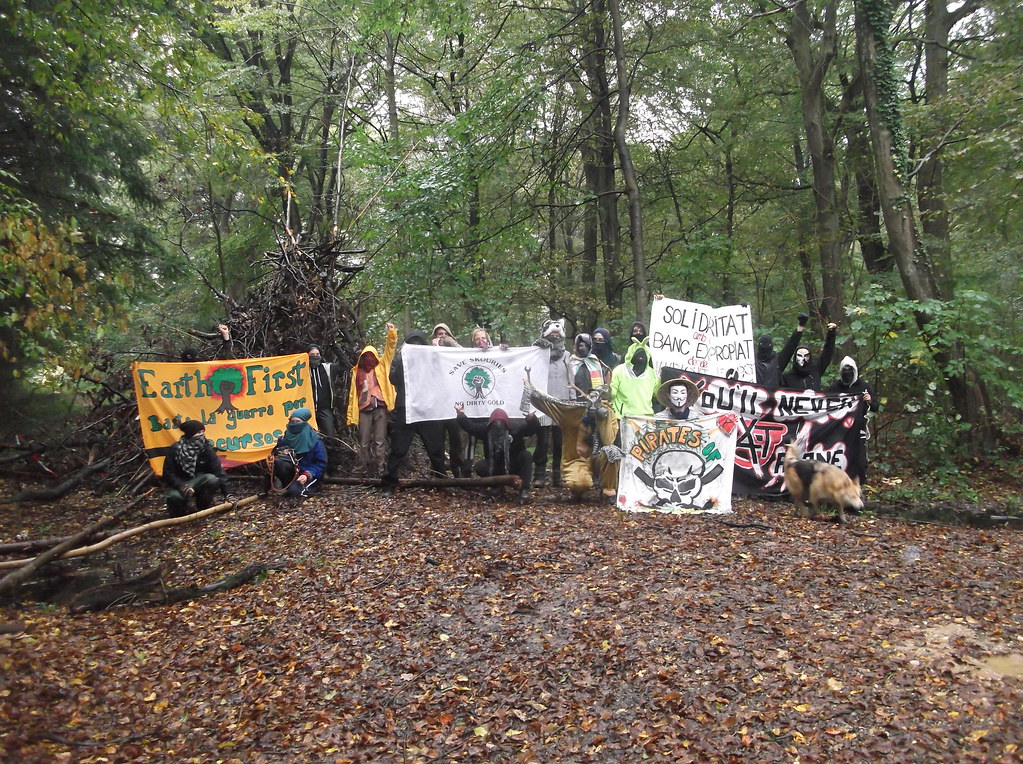 Today we’re sending messages of solidarity to the blockade at the SUNCOR refinery in Montreal, Quebec that took place yesterday, to the Banc Expropiat squat under threat of eviction in Barcelona, Spain, and to the resistance against the gold mine in Skouries, Greece.

Early on October 7, four women blockaded the SUNCOR refinery Montreal using tripod and lock-on techniques. This was to protest the reversal of Enbridge’s Line 9B oil pipeline, which will be bringing Tar Sands oil from Alberta through Montreal for export.