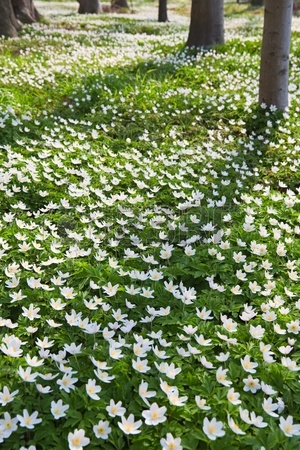 Wood Anemone has once again covered the forest floor with white flowers. One of the first plants to shoot up has been nettles now full of vitamins and being very tender perfect for spinach-like dish and pesto with the plant re-growing quickly after being cut. The tree leaves have not yet opened up but the lower forest canopy of shrubs and bushes is taking advantage of unobstructed sunlight to open their leaves first so the forest floor is beginning to look lush. Insects and migrating birds have returned as well.

The blooming plants are an excellent chance to identify many of the smaller medicinal herbs which are at other times are harder to spot and are easy to mistake for other look-alike plants.

For more info on the Hambacher Forest floowers, herbs and their medicinal and food uses check out: http://forestabloom.blogsport.de/ 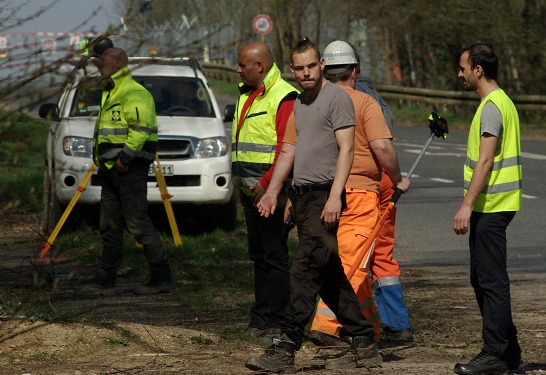 There has been lots of uproar in the past and even threats of mobs coming and buring the #Meadow in response to roadside crosses being put on the barricades in the forest. Well now we know who the neo-pagan barbarians, destroying the crosses, taking away the local jobs, and burning and demolishing the local villages, really are. It is the RWE employed security guards. During their last intrusion in to the forest, when a group of 8 secus entered the forest smoking cigarettes, taking photos and laughing at tree-sitters one of the crosses commemorating trees cut at “Jesus Point” put-up by one of our supporters from the local village has been destroyed. The cross seems to have been hidden somewhere in the forest and its sign was left torn at where the cut tree and the cross once stood. 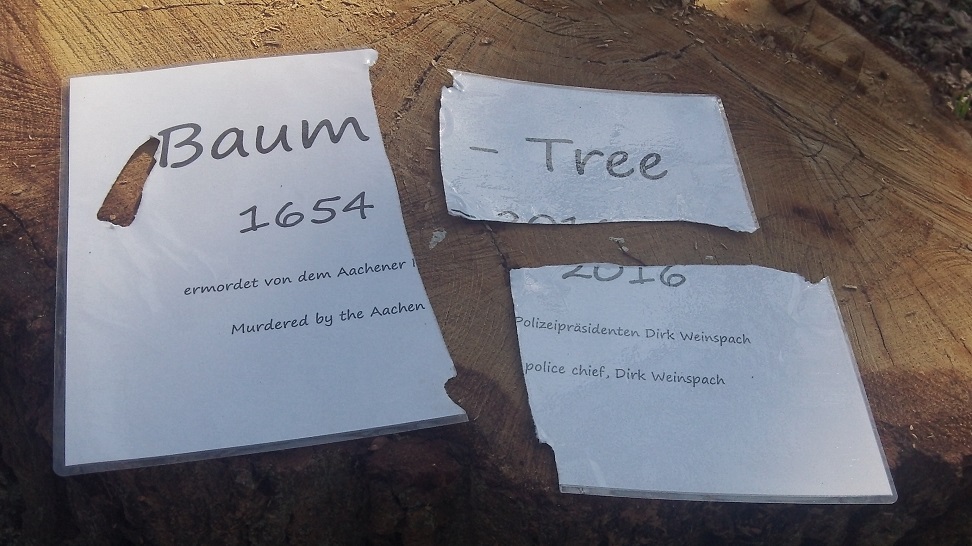 This week a re-trial took place in Cologne concerning an eviction of Remi’s Tower barricade during the Cultural Fest in 2015. That eviction resulted in a 3 month imprisoment, 23 day hunger strike and Jus being put under constant suicide watch(basically being awoken every half an hour, through out the nights, to see if he was still alive) for the duration of not accepting food. The police action that led to that has been also symbolic of large repressive actions against single structures like living barricades and compost toilets involving hundreds of cops. These periodic shows of force have taken place over many larger events like Shillshares Camp in the forest. That has not happened on the previous 2 skillshares as they have been planned at the last moment to make planning a large repressive operations more difficult. This upcoming Skillshare Camp _has been_ announced with lots of advanced notice so time will show if another large and expensive action will take place protecting Global Eco-Terrorist RWE and trying to demoralize those who come together to dare, dream and do resist it.

This trial itself was an appeal of an earlier rulling that has levied assault charges as a result of a bulldozer window being cracked and the operator of the machine claiming that he was injured by twisting his head to the side with no medical diagnosis filed or medications taken to back up this claim. This has been a part of an ongoing pattern where many activists have been seriously injured by the secus and then counter accused of having attacked and injured them(with no injuries on their part that are documented) to redirect the public attention from the destructive and violent nature of both RWE’s and Police actions agains Hambacher Forest.
Greater Good otherwise called Necessity Defense, which allows for lesser laws to be broken to prevent a larger crime from happening, was used pointing out to World Health Organizations 2015 Study Raising the number of deaths resulting from airborne pollution asociated with fossil fuels from just over a million to seven million a year. The witnesses testifying against the defendant were asked whether they are aware of this, resulting in the judge at first alowing this question to be asked and then requesting that it be not asked anymore. Also the court has refused to alow an expert to testify on the validity of this study which was ironic as the World Health Organization is made up of the top experts in all fields of Western Medicine and all of its studies are peer reviewed and accepted by the medical community including medical forensic experts. The “authorities” that could perphaps testify to the validity and bias of this study would perhaps be people like Noam Chomsky, Naomi Klein or Vandana Shiva who could say a word or two about how WHO is full of of experts with Pharma connections and its studdies have allways been biased towards the Petro-Chemical industry, and hence even the 7 million death a year is once again a conservative estimate towards which they have been forced by new particulate detection and effects data. The courts of NRW(NotRWe?) are not likely to listen to either as they are more inklined to accept a self diagnosis from individuals responsible for this situation without having to offer a medical documentation of any sort.
In other words you can detain individuals for several months and put them under abusive observation without any medical proof of their actions One however can not miss a day of work without a doctors note. Prematurely shortened lives of millions also become an externality that is not part of the bussines/court equation and shall not be discussed in polite company.

The outcome of the trial however was that the a fine of 1500 euros has been imposed for the cracked front windscreen of the bulldozer. However the charge of assault has been reduced to attempted assault, and the draconian 3 year probation reduced to probation to the moment of trial.