01:30 pm
Sorry for the bad reporting here the last days. It got very silent in the Hambach Forest.
The Police didn’t visit since the first few days of the reoccupation and the occupations are growing and getting bigger and bigger.
New images will come soon!

01:25 pm
After they entertained the crowd there, the Carnival-Column left the forest and drove away =/

12:55 am
The cops are going through the second occupation! But still no information why they are going there.

11:45 am
There were no cops in the forest. But when the security was blocked today they went off.

Let’s wait and see.. We keep the news up to date anyhow!

This (all through illegal) action shows how conservative, fascistic and brutal the police is.
Our solidarity against their repression! Because together we are stronger then they are!!

~02:00 am
A Car has been stopped by the Police on the way from Düren to Merzenich because they wanted to make a car control. When they wanted to get the identity of the co-drivers, one person said, that she want to know the reason for this identity-check, before she will give her identity. Subsequently they dragged her brutally out of the car and took her to the police station. A detailed Report only on german yet

2:58 pm
Do not feel neglected or anything, there’s just nothing really “newsworthy” at the moment, but we are gonna keep our eyes and ears open:
No room for police and RWE! Not here, not anywhere!

…let’s get into tactical discussions, let’s use the metaphorical momentum and move along further, even more into activity, acting, not reacting, always onwards: Dancing, prancing, laughing, fighting
and becoming really unevictable: in the forest, on the meadow, in their heads (and in our own)!

Securities (maybe in large numbers, we try to check this again) are roaming the forest, playing dumb (not quite the hard thing to do for them of course), trying to act intimidating and authoritarian (hard for us to take seriously).

Let’s see what’s gonna happen, maybe they are just bored because all the shops are closed on sundays, who the freakin’ hole knows?

1:10 pm
GOOD MIDDAY LOVELY RESISTERS!
It is the 27th of April, a partially cloudy SUNday and we have the Ticker running in case anything happens that could be of all our interest 😉

8.00 pm
An overview of the last part of the hambach forest and the occupations: 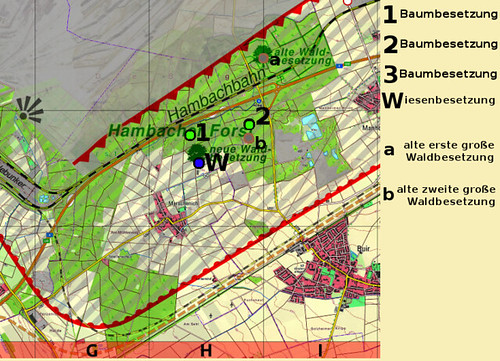 7.37 pm
Word has it that all (!!) coppers have left.
The party at the 2nd new occupation seems to be a real spring festival, there’s dancing, laughter and a general celebration of resistance!

TRIPLE (hihihi) hoorays for our struggle against RWE (and all the other shit) but let’s also not forget:

After the eviction is (obviously) before the re-occupation
but…
after the (re-)occupation is also before the next harassment!

Celebrating,
gathering,
building barricades,
completing platforms,
loving each other,
taking care of each other,

let us be a wonder, bigger and more massive than ever before!

7.05 pm
At the 2nd new forest occupation (close to the “old” one which has been evicted last month) there is a “party”, music, amazingly good mood and the press are present!

18:43
HOW HILARIOUS!
We intercepted a discussion between securities and the Rhein-Erft-Police. The Copper are not responsible here and do not feel correctly equipped, but they want to be back Monday “when the slobs are gone” (quote by the police chied).

Hahaha, see you Monday then, try to relax during the weekend!

And because it is so sweet here the news on what was sung as the “authorities” left the forest:
“Defend yourselves, built resistance,
against coal excavation in every country,
to the barricades, to the barricades,…”

6:21
Police seem to have left the forest rather completely, they gather at the entrance/exit of the motorway as well as at Collas gravel quarry.

6:07 pm
At the “first” new occupation (5 trees, vfrom the meadow on the main path in the woods, take a left, than at the gate to the right towards the open area,…) has been a unit of hundred copper but they did leave already.
😉

6:05
activists in Lock-Downs between “Jesus” (Pilgrim’s point) and the gravel pit!

5:51
One of the new occupations (on the main way/road through the Hambach Forest) is closed off by rows of coppers!
ACAB!

5:32
– the 3rd occupation is hassled by app. 15 Secus and they say stuff like “trespassing” and the such
– die 2nd occupation now seems to be detected 2 Secus stand around there
– the 1st new occupation keeps growing

– a large police unit is gathering between Collas Gravelquarry and “Jesus” (pilgrim’s point)-crossing.

HAVE FUN, BE RADICAL, FEEL OUR LOVE AND SOLIDARITY!

5:26
Our sources have been contradictionary at the moment, we work on that!

5:18 pm
Demo has ended in Morschenich, app. 80 people are on their way to the encampment on the meadow.

Our sources tell that the police retreats and apparently it seems likely that nothing much is going on anymore today.
Apparently!

News from the occupations

(a) Apart from the constantly reinforced and widened occupations on the aforementioned trees, two more trees have been “developed” now.
3 Securities did pass close by recently and must have had intervisibility with the activists!

(b) The other new occupation still seems to take a lot of pleasure in its own confidentiality and is growing as well.

(And us? We listen to classical music, eat vegan chocolate and are drinking tea)

4:17 pm
The demo was stopped.
This resulted in a split, half the participants are on their way back to Buir while the other half now definitely walks on towards Morschenich!

And the forest occupations are growing constantly – the mood on-site is fabulous!

3:33
Police and Secus are not longer present on the bridgeat the exit/entrance of the Autobahn.
Newest information has it that round 50 copper guard the coaltrainlines, which do not have ANY TRAINS running during the demonstration!!

15:00
The demonstration is running and creates a lot of fun! Apparently there’s 100 people! Pursued by 10 Coppers (in the middle), 20 Coppers (on the sides) and 8-10 transporters (at the end). The coaltrain(lines) are protected by one and a half million coppers.

14:40
Two (!!!) constantly growing occupations in the Hambach Forest, a demonstration starting from Buir and many happy people, sunshine and spring fever, hey!

13:43
Another SECOND occupation in a different part of the Hambach Forest just got announced 🙂
We are brimming and foaming in pure joy, we jump up and down and also eat noodle salad…

The exact place of the second occupation is not to be publicly announced at this precise moment but you know we’re gonna keep you updated. Promise!

And everybody knows: Der occupied forest is happy and RWE is crappy!

13:23
Approximately 15 transporters on the way to the demonstration in Buir, which starts at the train station (2 p.m.).
In the forest and on/in front of the meadow everything seems to be calm – apparently there’s no more “pigs”, diggers or transporters there! Amazing!

12:45
(a) The ten transporters (“copperhopper”) are not in the forest anymore but on their way to the MEADOW!!!

(b) Apart from that there is an unknown number of copper transporters on the bridge over the Autobahn/Exit Buir/RWE Shitmine.
Always neatly waiting for orders, you robots!

[- Retrospective:
12.00
People came into the forest to cut a tree for (mis-)using them as a traditional “Maypole”. Today’s Re-occupation seemed to be unknown to them. On the way inside the forest barricades had been lifted and afterwards (!!!!) put back at exactly the same spot by these people. This is real and living solidarity!
Thanks a lot but please do not cut down a tree next time – still we wish you a splendid Saturday.
And whoever feels like it of course you can also set up NEW BARRICADES. Feel absolutely free!]

12.23
Love and support from Romania!
Our Siblings are sending us love and energy, as well as direct support: Rosia Montana goes Hambach Forest!

12.10
10 copper transporters appeared at the exit of the Autobahn (motorway) at Buir and they made their way to the entrance of the forest.
We told you we’re going to re-occupy, what took you so long??? 🙂

11.55
Everything is smooth, people are “on their way”, tree occuptions grow still and preparations for this and that are being made,…:-)

There’s not any real superhot “news” yet, but walkways, beds in trees and the such make the freshly occupied trees more lively and more fortressy 🙂
And by the way, the sun is still shining and we still love y’all resisting folks!

the occupied trees are getting cozy! In every each one of them platforms are already installed!
We’re brimming in anticipation! Yeah, yeah, yeah! The sun is shining and the “monkeys” are climbing!

10.40
3 trees are squatted. There’s people squatting three different trees. We congratulate, we’re stunned and we shout it out loud and full of joy: “Fuck RWE!”

10.30 Uhr
Hello you loved ones, a revolting and wonderful Morning on this sun-ridden Saturday for all of us!

Press Release about the accident on Monday