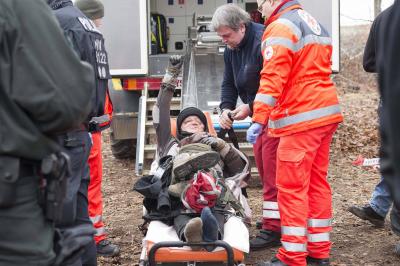 6:00 a.m. Some vehicles of police and fireworkers have been spotted in the forest. We assume, that this is the announced eviction of the tree occupation “Newland” north of the former motorway A4. Stay tuned.
6:30 a.m. two persons locked themselves to each other on one of the entrance roads.
12:00 a.m. the eviction is done, the person was smiling and waved dring by, followed by the technical team in their white van.

Eviction in Hambach Forest: Tree occupation “Neuland” under siege
Since 7 a.m. cars and trucks of police have been spotted in Hambach Forest. They are about to destroy the tree occupation “Neuland” at edge of the clear cuts north of the former motorway A4 near Morschenisch.
At November 5th a 250 years old oak near the former A4 motorway has been occupied to block the ongoing cuttings at the north edge of Hambach Forest.
[translation in progress]
more info in german

NODAPL SOLIDARITY BANNER IN THE MEADOW