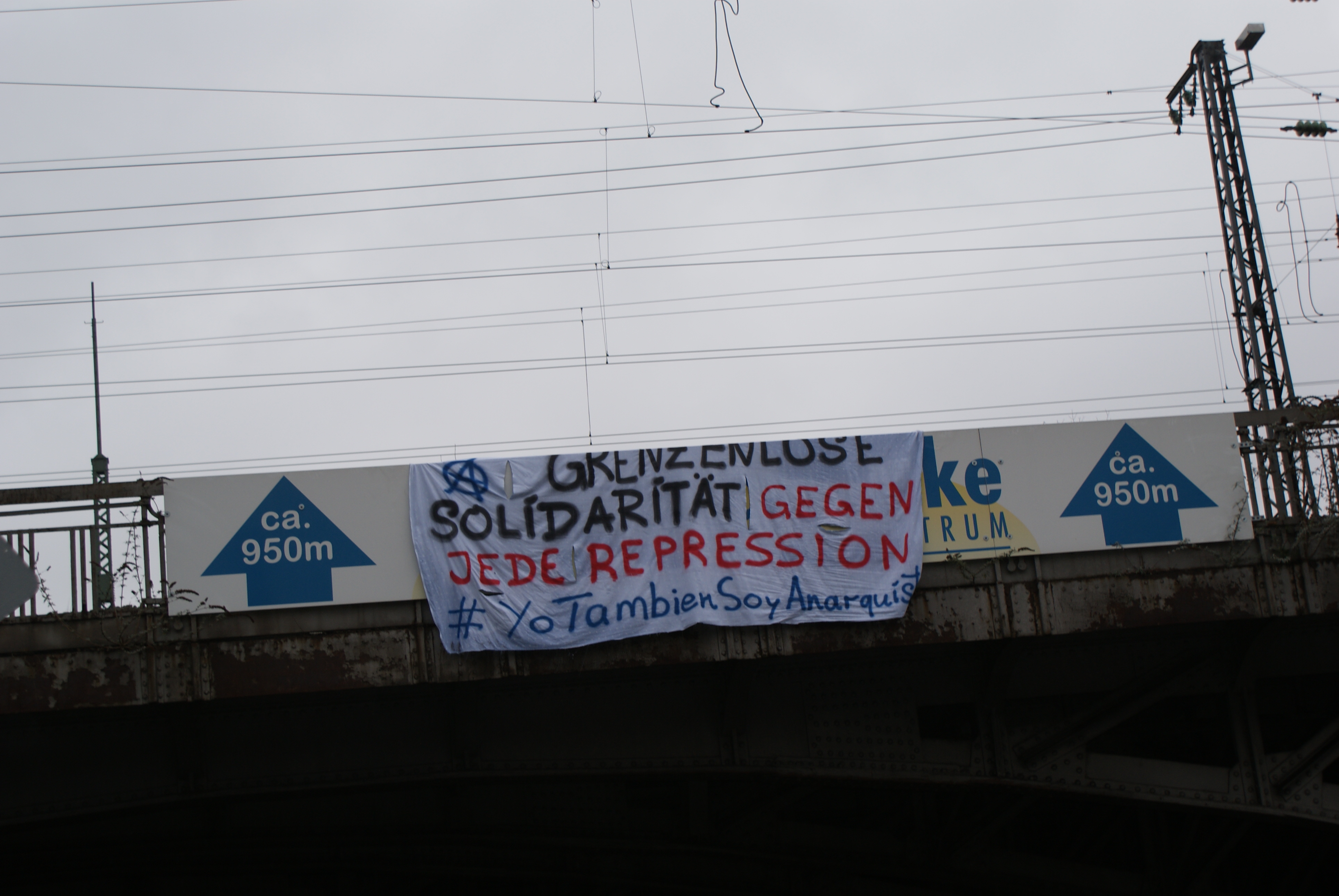 ( pic from Dortmund-agdo)
Pandora’s box and the hotchpotch of Spanish anti-terrorism .Text written a week ago about Pandora’s police operation in Spain against anarchists.

The morning of Tuesday the 16th of December has surprised us with a wave of house raids and arrests. Surprised us? We are not going to lie. Let’s start again. The morning of the 16th of December has NOT surprised us. The autonomous Catalan police, the Mossos d’Esquadra, and the Guardia Civil and judiciary powers of the Audiencia Nacional stormed more than ten houses and a few anarchist spaces in Barcelona, Sabadell, Manresa and Madrid, with house raids, arrests, confiscation of propaganda material and information, to also use the occasion to enter and plunder, with the entire riot police team of the Mossos d’Esquadra, Kasa de la Muntanya, a squatted place that has existed for 25 years.

According to the media, which as usual are proving their role as police spokespersons, the goal of these arrests is to break up “a criminal organisation with terrorist goals and a violent anarchist character”.
Although it seems easy to repeat an often used phrase, we will do it
anyway: the only criminal organisation that terrorises people with its violent character is the State and its tentacles: the media, the juridical apparatus, its repressive bodies and its politicians, whatever spectre they belong to.

Why did the repressive action not surprise us? Because we were expecting it.

It is not about pretending to be oracles or something, but about being able of reading between the lines, and sometimes literally, the things that happen. As it happened with the arrests of other comrades last year, since a long time they have been busy orchestrating waves like last Tuesday’s against libertarian and anti-authoritarian milieus, and even though the different razzias weren’t that big they do show a prospect of similar situations.

Since a few decades the anarchist milieu in neighbouring Italy experiences every now and again, and in the past years with more regularity, macro-operations that are similar to the one on Tuesday. Not only because of the format of the spontaneous razzias and house raids in several houses, also because of the use of names that are easy to remember and carry a certain dark humour, as in this operation, called Pandora because this case, as the media repeats after its juridical sources, “was a box that despite the numerous frights it has given us could not be opened”. By “numerous frights” they refer to several actions that took place throughout the entire terrain of the Spanish State in the past years. To come back to the Italian operations, one only has to remember a few names that came up in the past years, such as Operation Thor, referring to the accusation of a series of attacks with hammers on cash machines and other offices; Operation Ixodidae, referring to the technical name of the family of ticks, as the fascists called the communists and anarchists; and others, such as Ardire, Cervantes, Nottetempo, etcetera.

Apart from the procedure and list of names another factor that reminds us of the neighbouring country is the role of the media, which also helped us to see what was coming. Since three years, or perhaps a little longer, the Spanish media have started a campaign to prepare the ground in such a way that operations like these are not only possible but also predictable.
Pointing out milieus, and sometimes even spaces or people with their full names, collectives, etcetera, constructing a fairly bizarre caricature of an internal enemy, is indeed nothing new, although in the last years the focus was on a very specific character: the “violent anarchist”, the “insurrectionalist”, the “against-the-system [antisistema] who infiltrates social movements”, etcetera.

The year 2010 was a glorious year for the Chilean State. Besides Sebastían Piñera, businessman and fourth richest person in the country, being chosen president, it orchestrated a policial, mediatic and juridical operation against the anti-authoritarian milieu resulting in more than a dozen house raids and arrests, known as Operation Salamandra and popularly known as “Caso Bombas”, as it was based on the investigation of a series of attacks with explosives that took place in the preceding years, and through the police imagery the creation of an hierarchical macro-structure of a supposed network that was responsible for all these explosions: a circus that did not only weaken the reputation of the State, besides the fact of rendering it ridiculous, but that also proved the clumsiness of the investigation procedure, like the falsifying of proof, blackmail or pressurizing in order to obtain informants or “repentants”, chance, etcetera. The process ended with the acquittal of all the accused and a desire for revenge of the Chilean State toward the milieu and those under investigation.

A year after the end of the “Caso Bombas” farce the Spanish and Chilean ministries, judges and cops are working together on a new case, this time on this side of the ocean. Mónica Caballero and Francisco Solar, both ex-suspects in the “Caso Bombas” case, are arrested in Barcelona, where they are living at that moment, suspected of placing an explosive at the Basílica del Pilar in Zaragoza, planning a similar action and belonging to an alleged terrorist organisation. At this moment these comrades are in preventive detention awaiting a trial of which we do not know when it will take place, and we also do not know whether their proceeding will change due to this new repressive wave.

The situation is more or less known to everyone and if we can be sure of one thing it is that the recent arrests serve to give shape to a case that on its own would not stand.

A few hours before the arrests on Tuesday the Spanish government made
known, through its media, that “the ministries of Interior Affairs of Spain and Chile are opening a new phase of enforced collaboration in the struggle against anarchist terrorism”. Last Monday, the 15th of December, the Spanish minister of Interior Affairs Jorge Fernández Díaz was in Chile to meet the vice-president and Chilean minister of Interior Affairs Rodrigo Peñailillo in the La Moneda palace, the government seat in Santiago de Chile. “In the struggle against terrorism, Chile will find a solid ally in Spain”, bragged the Spaniard, whilst being decorated with the Grand Cross of the Order of Merit of Chile, “the greatest distinction of the country in civil merit” according to the media, a trophy that the Chilean State in this case handed out for the police work and as a reward for the arrests of comrades Mónica and Francisco last year.

Besides praise and rewards, businessman Fernández sold a bit of his own: policial and juridical training, different kinds of repressive material, etcetera.

And what will come…

What is the next repressive step? We don’t know. At this moment not much is known about how our comrades are doing, of what exactly they are being accused, what repressive means they are subjected to, whether they are in preventive detention or not, etcetera.

What is certain is that this operation is not a fact standing on its own, but another shackle in a chain. A repressive chain that at times is cruel, and at times subtle, in which since the new laws (one only has to think of the recent Mordaza law) several things are incorporated; the hunt on people without papers through every time bigger racist raids, the police brutality, until the aspiration to manage the misery and administrate the repression, which, all things considered, is what the State does, with a pseudo-left (with Podemos at the lead) that more and more becomes a clearer parody of itself. Evictions, beatings, fascism, juridical and punitive hardening of every kind, nationalist and social-democratic illusions, is what today will bring us. Something worse does not have to be expected, the worst has never left.

The array of opportunities of the Spanish anti-terrorism is a hotchpotch in which everything can be put. It is there, in sight, to remind us that for the State, struggle equals terrorism. It functions as a scarecrow. Do we let ourselves be frightened?

The State and its servants say to have opened Pandora’s box. In Greek mythology Pandora is the equivalent of the Biblical Eve. With the characteristic misogyny of both mythologies, Pandora opens her box as Eve eats her apple, liberating all the evil that it contains.

We are capable of creating our own story and ridding ourselves of their shit mythology. Our history is different. The “box” that this repressive operation has opened urges us to act, to be careful, to be alert in regards to what their next step will be. It makes us think, again and again, of the world we want, and the distance of that world to this one. It makes us see the urgency of acting, of going forward.

The locked up comrades are part of different projects, spaces, collectives, etcetera, and it is very important that these do not decline, that the ruin (in every sense) to which these kind of situations lead does not create powerlessness and a feeling of paralysis.

We always say that “the best solidarity is continuing the struggle”.
Right, but what does that mean in practice? We also repeat in unison that “when you touch one of us you touch all of us”. This has become clear through the reactions and protests that took place in several places, just like the unconditional warmth of the comrades on the outside.

We can be certain of one thing, and that is that the locked up comrades can feel this warmth which goes through the iron bars and isolation, because it is the same warmth that they knew to give at other occasions.