22:00 One more person has been released from police in Cologne-Kalk. The fireworker trucks spotted on the way to the tower. It looks like a barricade is burning.

21:20We can hear loud party sounds and music from the tower

21:00 Police at the barrier tells, the person from the tower is back on the ground. One person can be seen put into a car. Sounds of demolition meanwhile …

19:32 Construction and drill sounds from the tower. Clowning from above.

19:22 One more person arrested. Try to release her failed because of too many cops. Come to the police station in Cologne-Kalk (address)
19:00 Eye contact to the person onto the tower barricade. Still locked on. Canting and drilling sounds alternate, person still locked.

18:30 Two persons have been released from police in Cologne-Kalk (address). A third is still assumed to be arrested. The two tell about calls from inside a cell and a another pair of shoes on the floor.

18:27 Since five minutes ago eye contact to the person on the tower.

17:34 Police cars left the hangar. There is a gathering at the police station Cologne-Kalk. According to police there the left person will be released at 18 p.m.

17:14 Four persons surrounded and searched by policed. Groups of cops walk through on forest paths. They try to send people away from the tower. They hear loud cracks.

17:05 Person on the tower is still up. A group of people in 100 meter distance is attacked by police. They start to disassemble barricades.

16:30 More police arrives at the tower. Police cars park at the hanger near the meadow occupation. Police patrols and civilist cars watch meadow from there. Person on the tower still locked.

15:40 Two person are at the police station in Cologne-Kalk. Around police cars are on the way to the tower. Meadow ist still watched by civil car and police patrol.

15:11 Two cherrypickers on their way up to the tower. The lock-on wich one parson has around the arm is being opened.

15:00 We assume the eviction will take one or two more hours.

13:55 The front glas of the sand digger has been damaged. The cops stopped their plan to fill their plain with the sand and are reorganizing. 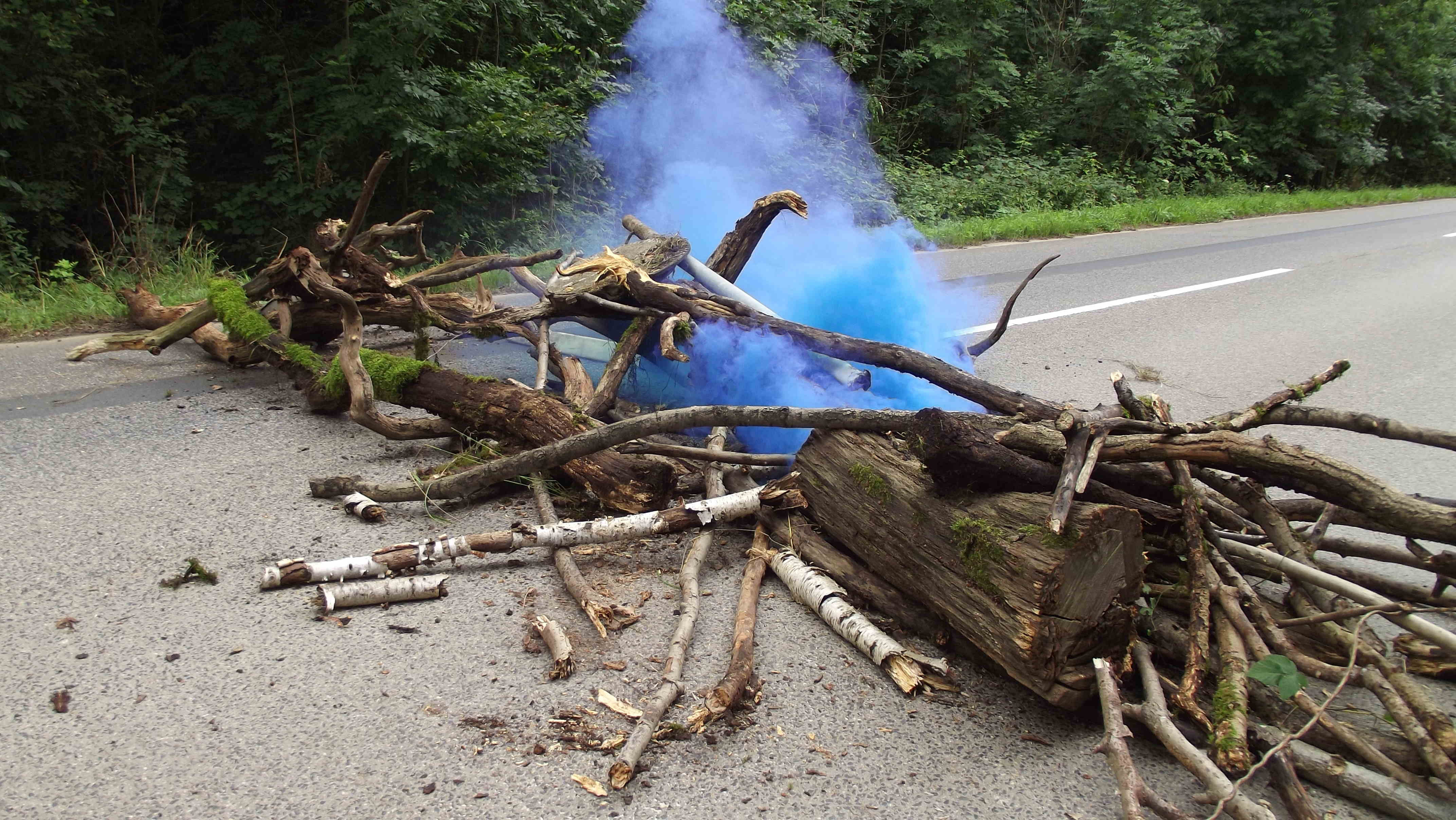 13:47 Police left the empty platform. Only the person high up remains. The entrances are barricaded with wood.

13:20 The ground around the tower seems to be so loose, that before an eviction it needs to be stabilized. A lot of sand is beeing put there. This can take some hours.

12:55 The person on the tower is still there. Probably two persons have been arrested.

12:30 climbing cops entered platform of the tower and threw down all private stuff

12:20 Police did not enter the tower yet. Currently in preparation of the tower eviction the bushes in area are cut.

12:00 Three arrested at the tower. No news about the person at the lock-on.

11:59 Around 20 police cars stand at the tower. The meadow patrol exits.

11:50 One person at the ground of the tower has been arrested. Still the area is covered with cops. The person on the tower remains up (eye contact hard, no more phone contact because of batteries)

11:47 A police car with eye contact to the meadow occupation parks near Morschenich

11:30 A seal tries for some extra bones – its howl sounds through the forest without breaks. A chainsaw joins. Around 20 supporters at the tower playing music.

10:42 Police removes lower tower legs to bring the machines nearer to the tower. Tower is shaking. One fireworkers car, a wheel loader and a cherrypicker are present. Supporters play music.

10:20 Wheel loader starts eviction. One person at the tower.

10:14 Peope try to get to the tower. Bickers with police. Cherry picker is being mounted onto wheel loader to get near to the barricade.
10:10 Machines to evict the tower are now present.

10:00 Around 50 cops around tower surrounded by shouting from above and below. Support is on the way. Hambi-Howl from everywhere. First barricade eviceted, machines for the tower is not yet present.

9:50 From the tower we hear demolition sounds.

9:30 The first barricade is being removed.

9:30 We get a call by the housed tower barricade in the Hambacher Forst. 50 cops arrive. A car with dark glasses inspects the meadow occupation.

SOLIDARITY TO HAMBI & THE RESISTANCE FROM PONT VALLEY OCCUPATION