Trial for alleged insult of judge Witzel
March 3 / lower regional court Kerpen
On Thursday, March 3, 2016 at 11 am before the lower regional court of Kerpen (Room 108, 1st floor , Nordring 2-8) there will be a trial for an alleged insult of the judge Witzel. He himself is district judge in Kerpen. With disgusting methods he tried to punish an anti-coal activist, which by now failed in the revision. Accused is the activist Jörg Bergstedt (one of the supporters of offensive self- and lay defense – so it could be fun and this is already the second attempt).
More info: Is it an insult to call a judge “perversor of justice”?

NOTE: For the results of these trials, go to
Outcome (?) of the proceedings in March

“Game Night” with KiFA
March 8 / WAA
To preserve the cultural treasure of the board game and for a nice gathering, from now on is held every 2nd Tuesday of the month a “Game Night” in the WAA. Games and little delicacies (vegan if possible) are very welcome.
Date / Location: Tuesday March 8, 2016 from 6:00 pm Kifa (Kitchen For All) and from 7 pm, game night in the WAA (Workshop for Actions and Alternatives), Kallsgasse 20, 52355 Düren
Open Street Map (Link will be opened in a new tab) 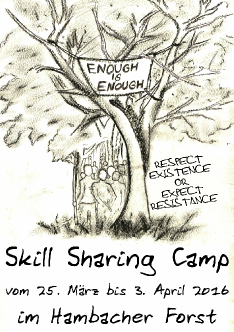 Skill Sharing Camp
March 25 – April 3 / Hambach Forest
For almost exactly 4 years, the Hambach Forest in the Rhenish lignite mining area near Cologne is occupied. This is a sign to stop the voracious excavators of the lignite industry and therefore a sign for a better climate and a system change. For direct resistance it needs people with diverse skills and creative ideas to stay a step ahead of the repressive power.
That is why we invite all of you to the 10 days Skill Sharing Camp from March 25 to April 3, to teach and learn skills together, and to try them out.

Florian, Marte and a third person are free!