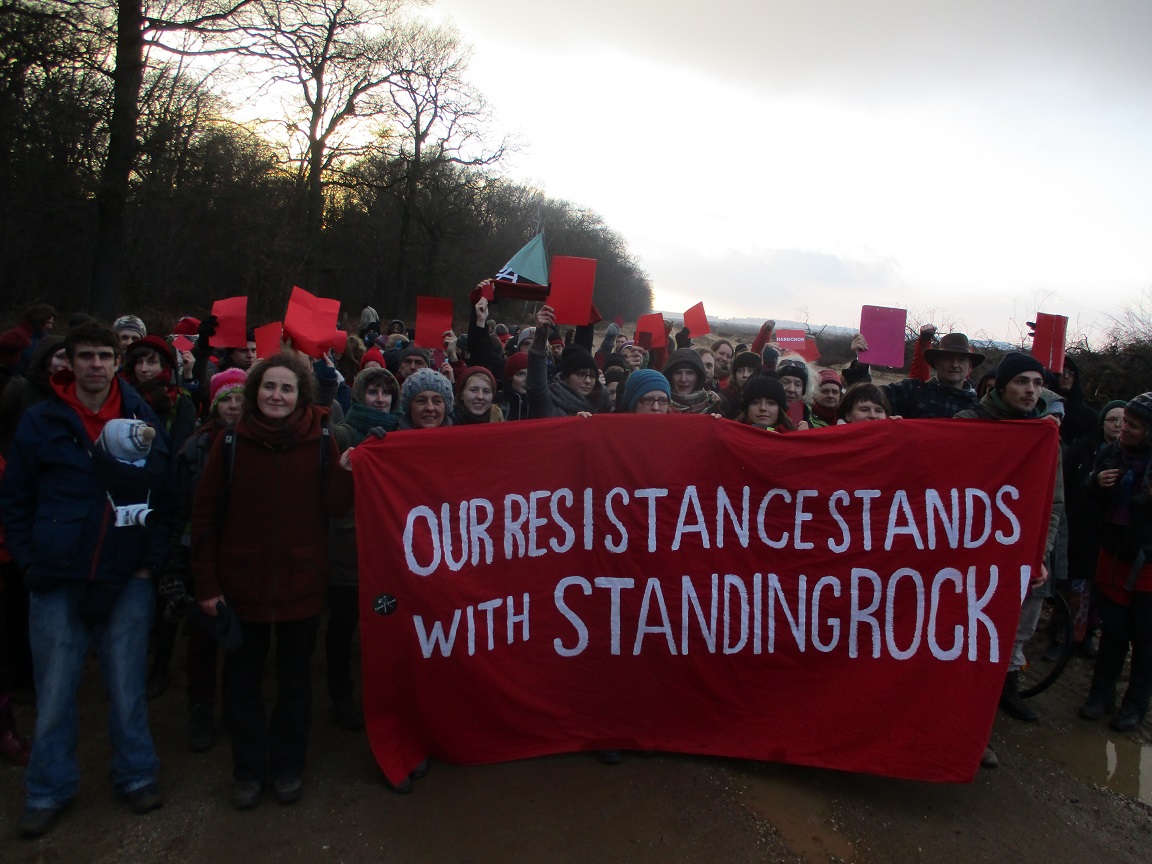 This Monday 1.17 another confrontation has taken place between Water Defenders opposing the North Dakota Access Pipeline and the cops. Rubber encased steel bullets were fired injuring several activists, tear gas was used and 14 activists were arrested. Barbed wire was removed formed into frisbies and thrown back at the cops.Several hour long standoff continued on the Backwater Bridge separating the protesters from the pipeline construction site. The pigs continued to shoot down any drones that were not their own. This repression is taking place while the Republican controlled state assembly of North Dakota is attempting to pass a new law that would make it legal to injure and even kill any pedestrians blocking a road while driving a car. This is obviously directed against Water Defenders who like many ecological activists often blockade roadways and who already have been hit and injured by idiots driving snow mobiles around the protest site. This new law would in effect allow any racist pig-headed vigilante to turn his already destructive and deadly vehicle into even deadlier and now even state sanctioned weapon. This brings up parallels of RWE’s secus also using a truck to ram, injure and then arrest a Hambi activist also with full sanction and approval of the state. Water Defenders are also currently facing Grand Juries forcing them to testify and list their comrades under a threat of imprisonment if they refuse. Regardless many have chosen not to cooperate. This resembles the cases of house searches, home visits and questioning by the german cops as experienced on many occasions by those involved in the anti-coal struggle in the Rhineland. Both are not even as much attempts to persecute as they are tools to intimidate and silence especially in the case of Water Defenders who are facing grand juries in cases dealing with repressive police tactics and their use of force resulting in activist’s injuries. The parallels and similiarities between the two movements come to an end however when one takes into account that none of us in the Rhineland has had to dealt with 400 years of colonialism, genocide and continuing state sanctioned racism and exploitation and its aftermath, 4-5 to 11 years maybe but not 400. Neither are any of us eposed to daily barages of rubber bullets, armored personell carriers and water cannons in freezing weather. In the case of Rhineland and RWE in particular the bullets _are_ flying but they are being shot by right wing hit squads aka crooked cops in places like Columbia against those who refuse to move from their homes to make way for RWE’s coal mines there, the gas is not tear gas but giga-tons of climate killing carbon affecting the global poor in the south of the planet the most, oh yeah there is even freezing water involved as well as antarctic ice shelves turn into mush and slide into the ocean and as the northern ice cover diminishes to the lowest levels ever recorded. Flooding hundreds of millions in Bangladesh, through out the Indian Ocean and beyond. Proving that RWE is just as racist and reactionary in its modus operandi as the rest of its Fossil Fool(Fuel) industry cohorts.

Therefore the only justice possible and attainable here will never originate from any of the capitalist courts which are now in a never-ending state of emergency and a mad race to out due each other with ever expanding arsenal of surveillance, repression and torture to protect the profits of their corporate masters. In a time of global ecological and social collapse the only justice that is possible is a justice attained by the struggle of resistance based on solidarity and unity of struggles such as the one in Rhineland, Standing Rock and countless others around the planet which are standing and fighting against the forces of greed, destruction and death.

In Solidarity with Standing Rock, and all others who are active in the Strugle….

Call to all who want that the forest remains