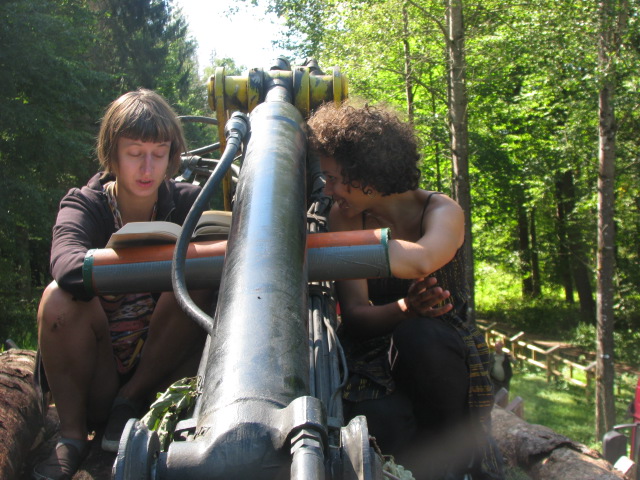 The ancient Białowieża Forest continues to be logged at times late into the night and from early hours of the morning by more than 3 harvesters capable of downing more than 500 trees a day.
However following a week long intermission the anti logging resistance strikes again. When the trucks loading lumber which is presently spread through out the forest have been observed by morning patrols, over 30 activists left the Camp for the Primal Forest. After reaching the nearby location, 6 lock-on doubles, later joined by two more, locked on with metal pipes to a 18 wheeler loaded with lumber and to another one that was practically empty. The activists have locked on on top of the lumber load, on the sides and in the back and to lumber supports on the partially empty vehicle. Banners were dropped from the top, sides and front of the vehicles. Support and media group were present throwing sandwiches, books, and isomats onto the trucks and across the police lines. The drivers of the trucks climbed on top, tore off some of the banners and threatened those attempting to retrieve the material with a knife. There was a constant stream of support from the visitors to the park and locals, stopping by and expressing their gratitude and appreciation for defending this last European lowland primodial forest. A local astroturf group Santa financed by the Polish Forestry Department also made an appearance. They attempted to engage and distract the activists through ridicule, insults and threats. Their confrontational tactics were quickly dissolved when many visitors to the park attempted to communicate with this Crypto Industry, Pseudo Eco group.

The owner of the lumber transport company TrakDrew.pl contacted the liaison of the blockade and issued threats to respond with a civil suit for the costs of his losses to each individual of the blockade. However when the recently published list (https://oko.press/liste-odbiorcow-drewna-puszczy-bialowieskiej-publikujemy-interaktywna-mape/ ) of recipients of lumber from Białowieża Forests was consulted it turned out that TrakDrew.pl is FSC certified which allows it to mix in wood that does not contain that certificate but not wood that has been denied it as is the case with all lumber coming from the site of the protests.
It is also important to note that lots of wood shipped from recent large scale cuts in the area is not marked and labeled in any way making it easier to mix with other batches and that the group issuing this certification is not even an NGO but a private company. However exposing this dynamic is an important strategy in making it harder to green wash lumber and its products which originated from one of the most bio diverse hotspots on the Planet and sell them as a product of sustainable forestry. Loosing this certification equals substantial loss of profits as FSC certified material, being a darling of “eco” papermills and furniture producers is currently in high demand. The threat of such exposure resulted in an unusual end of this particular blockade. The demand to leave the wood in the forest was agreed to and the protesters unlocked from the truck full of lumber onto which then the remaining several logs from the still blockaded and locked on vehicle were loaded. As the last 3 locked on groups awaited locked on to now completely empty truck, the full vehicle entered the forest to deposit its load back in the woods. As this occurred there was still enough activists to jump back on top if it attempted to drive out of the forest and not enough cops to stop them. After this surreal leaving of the still dead lumber in the forest one of the trucks with the loader crane continued to linger in the area and a patrol remained in the vicinity to make sure that it did not load the same cut trees once again.

There was only one arrest, which is connected with a present right wing media shitstorm and an attempt to detract from how both the Forestry Department and its contractors are on a defensive. It constitutes a rather nefarious attempt of damage control and of movement character assassination which includes a member of the catholic church clergy as its main actor. The individual involved is one Tomasz Duszkiewicz a chaplain general not only of the central directorate of National Forests and the Environmental Ministry but also of Hunting Association which he is also a president of as he apparently placed himself in that position without the standard election by fellow hunters with a letter from high up in Warsaw to the association recommending that he retain that position. Of course he is an avid active hunter with a home full of hunting trophies, rumoured to include protected species. Duszkiewicz is a favourite of environmental minister Szyszko who is behind the present logging of the Primal Białowieża Forest and regularly stages catholic masses at exclusive hunts involving yes minister Szyszko as well and other high government officials and businessmen. Poland ranks high on corruption and lack of transparency indexes in the region and Chaplain General Tomasz Duszkiewicz is involved in few scandals himself including but not limited to receiving a government forest residence in the heart of Białowieża reserve and a mysterious fire at one of the residences that he later acquired. That home is close to one of the previous occupations and Duszkiewicz showed up at this latest blockade as well. He proceeded to film activists by holding his phone right in activists faces and moved on to insulting a wife of on of the activists present at the scene, who took his camera out of his hand and put it in his pocket. No altercation was witnessed or recorded by media and numerous activists however several minutes later the activist in question was arrested by the cops for assault. Duszkiewicz showed up at his next appearance already with one arm in a cast and curiously within an hour the environmental minister was already making inflammatory statements on right wing Radio Maria, which in turn is part of a media empire praying on the elderly for donations with of course pretty shady banking practices.

The reports that followed only picked up by right wing media not only labelled ecologists as dangerous terrorist but also related the priest’s account stating that he was threatened with decapitation if he published his footage. He must have caved in to that threat as the footage from his phone remains unpublished but only a grainy distant footage showing a hand reaching in his direction shot by a hostile blogger of a non existent blog is published on those sites. Right wing, nationalist and neo-Nazi elements are particularly active in Poland with numerous attacks on emigrants, refugees and activist centers having taken place. Duszkiewicz putting his hand in a cast after an alleged confrontation that was not noticed by over 30 witnesses makes him personally responsible for any attacks that might occur in the future against the coalition of activists, botanists, entomologists, artists and locals who are engaging in the struggle to blockade the destruction of this irreplaceable Puszcza Białowieska the last hold out of a long list of endemic and endangered species.

The present PIS ruling party has taken completely over the state media and turned them into a propaganda machine, removing any remaining if rather illusory separations of governmental power and the judicial branch, putting women’s issues in the cross hairs, targeting and vilifying gender and immigrants. In this reality of profiteering, hate and corruption segments of local population regularly respond to inflammatory state media reports strategically attempting to divide, destroy and profit with threats of setting places that are sympathetic to the protest on fire and targeting them with inflammatory sexually threatening fliers, the activists at protests and blockades are also informed by the state financed puppets that they should be executed. In this climate it is not likely that logging will stop any time soon without further resistance and more than likely with recent fabrications by members of the clergy that the level of threat and repression will continue to increase.
More than likely that is unless solidarity actions targeting embassies, consulates and those connected to the the published distributors of the commercialized remnants and bones of the ancient Białowieża forest take place.

A call goes out to extend your support no matter where you are, to extend it to all of
those engaging in this struggle regardless of where they might be…

Donation Appeal for the WAA

Destruction of towns and villages for Garzweiler Mine Continues