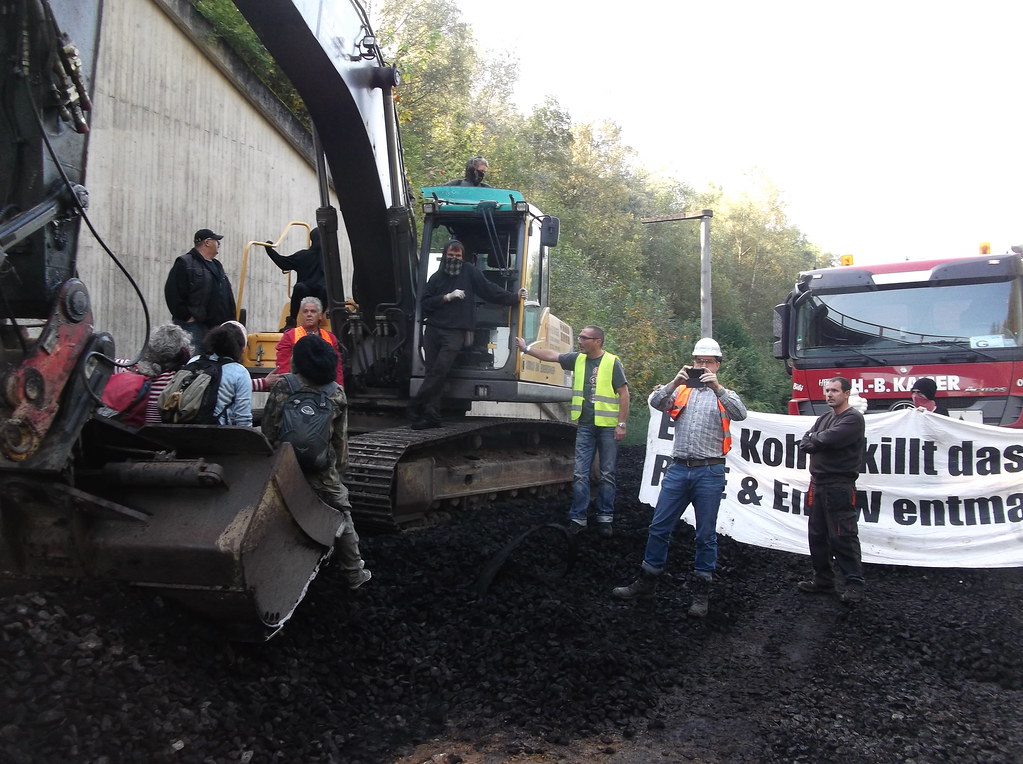 Today, on October 1st 2014, the demonstrations against the ongoing clearance of the Hambach Forest continue at the gates of Europe’s biggest open cast mine.At 09:25 am three bulldozers, one chain dredger and one truck were occupied at the gateway of the open cast mine Hambach.
The workers of RWE and the hired security reacted violently. They attacked the demonstrators with metal pipes. Diggers which were occupied by persons sitting on them continued to move, disregarding the fact that this was a serious thread to the activists’ lives.
Due to the violence performed by RWE’s wageworkers the activists were displaced from the territory already 15 minutes later. They withdrew to avoid further violent escalation.
Is the planned destruction of a forest more important than the health of human beings?
Further information on today’s events and pictures will follow soon!

Despite the violent behaviour of the workers nobody was injured seriously. Here are pictures showing the action: 01.10. blockade action

One person was blocking the shovel of a chain dredger. The driver started the engine anyhow and began to shake the shovel trying to throw down the person sitting in it. One of the truck drivers tried to remove an activist from a vehicle violently using his hands. When this didn’t work he grabbed a tool and attacked the activists.

The workers atacking the activists work for the deconstruction company H.B.-Kaiser Abbruch und Erdarbeiten. This company it at the moment responsible for the deconstruction of the old Hambach Railway in the name of RWE. Several machines were working although people were standing close to them. The drivers declined to stop the engines, even though they would have been obliged to do so for safety reasons according to German law.

The workers attacked the activists not only with their fists but also using hammers and even a crowbar. Hein Bert Kaiser, the owner of the company, was on site as well. He was actively involved in the violence against the activists and even threatened them: “Whoever damages my diggers and cars is going to die.” Being asked, he confirmed: “This is a death threat.”