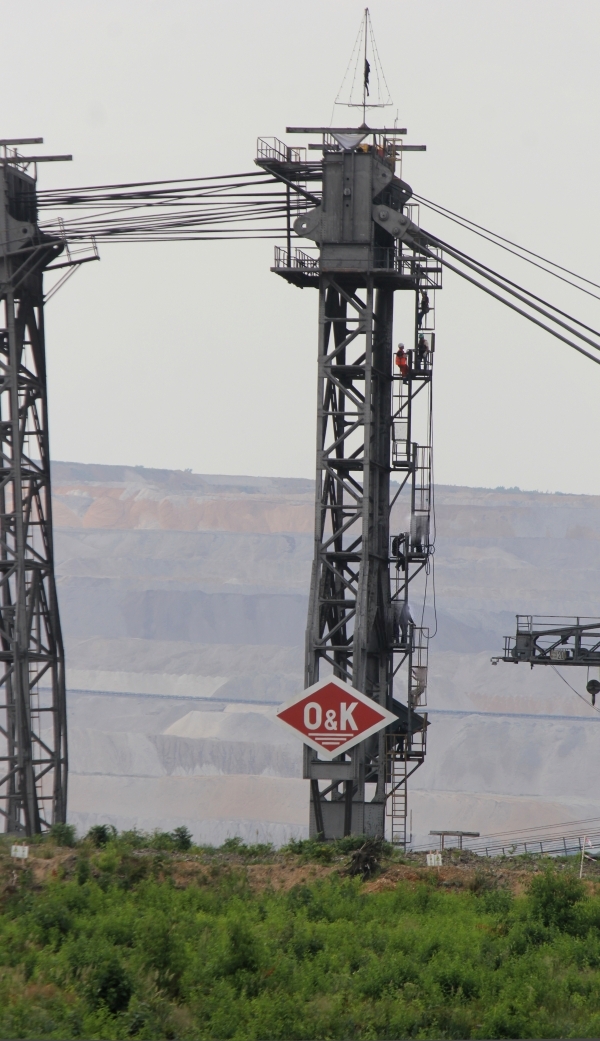 21:00 All the people involved today have been released from the police station in Düren. We are happy and celebrate the successful campaign!

17:20 On top of the digger at the edge of the pit still flies the Jolly Roger, one lonely person is clearing up ther (or whatever). Occupiers and climbing teams are no longer visible. Still, the excavator stands still.

17:10 The excavator on the edge of the pit is evicted.
Because we do not have any contact to the slag excavator since a long time, we assume that this excavator has been evicted too.
We wish our friends much power for the next few hours and look forward to be able again to hug them all soon.
Stay strong!

16:12 Cops call on the meadow occupation and ask for “constructive proposals” to resolve the situation. Apparently, they are at the end of their powers and try to persuade us to give up. Also they seem to be afraid of a supposedly incredibly fast approaching thunderstorm. At least some police people seem clearly to be totally stressed, at least our laughter was not really accepted wholeheartedly.

15:57 A released person is hospitalized.

15:38 Three other activists were released in Düren and welcomed by their friends.

15:03 On the excavator at the edge of the pit Klettercops (climbing cops) climb the machine again – we assume that this time they have the intention to evict.

14:30 Also near the slag excavator cops are moving around.
They claim insistently that there will soon be a thunderstorm and that the activists should leave the excavator for their own protection.
According to the activists a cop is counting clouds.

14:00 First people were already released in Düren. The height rescue team (6 people) has left the excavator on the edge of the pit, the occupiers remained and wave. The Hambi wolf’s howling is to be heard from several places.
The two coal excavators have already been cleared, a prisoner van arrives in Düren with other activists.

12:23 First secure information that activists are detained at the police station of Düren.

12:20 The climbing units have arrived on top and pretend to be fire department people, who only want to explore the well-being of the activists.
11:50 Meanwhile two patrol people enjoy the water sprinkler. The technical units have arrived under excavator 290.

11:35 There is a message that now 5 of 8 excavators are inoperative.

11:00 “It just feels so incredibly good to have stopped this nasty steel monster. The entire hole appears like a surreal and sadistic giant playground. Mega depressing view if there would not be the other standing excavators and the people at the occupation. This makes loads of courage. Solidarity Greetings from the reference group Dirt on Steel Thing on Excavator 290.”

10:00 On excavator 290 the occupiers wake up – a little sleep was possible- and begin to install sunshade tarps and to hang up banners. They soak up the sun. 5 police officers can be seen on the ground. But they were not yet on the machines. Fortunately not even the workers of RWE react to the invitation they roared up: “Just jump down!”. But Team Blue did not meet with the demand to bring up some beer either.

6:00 On all excavators bengal flares are lighted as a photographic evidence for the qualifications in the Climate Games

5:30 The caught person was handed over to Team Blue, and now sucks her dungeon warders.

5:15 A 4th excavator is occupied! The second of two coal excavators.
A person has been intercepted (probably by Team White / Securities).
Now all excavators at the carbon level, so all those that (are supposed to) dig coal at the lowest level, stand still.

about 5:00 a group that was moving in the open pit, probably has been caught, there is no contact anymore.

4:41 A 3th excavator is occupied! A slag excavator on the penultimate level.

4:30 It is confirmed that the dredge at the rim is standing still now.

4:26 Another excavator is occupied! This time it is a coal digger in the deepest level of the pit.

3:42 Team Blue adheres to its own rules: According to the police, the excavator is now silent.

3:19 Contact with the excavator on the rim of the opencast, the machine is still in operation.

3.11 The police are called, because the machines are not stopped despite non-company persons on the excavator.
So Team Blue is under pressure: The police are, according to their own statements, on their way to the open pit to settle the situation on-site.

2:50 An excavator, on the rim of the Hambach opencast mine is occupied!
The machines keep running, the workers do not stop the excavator.