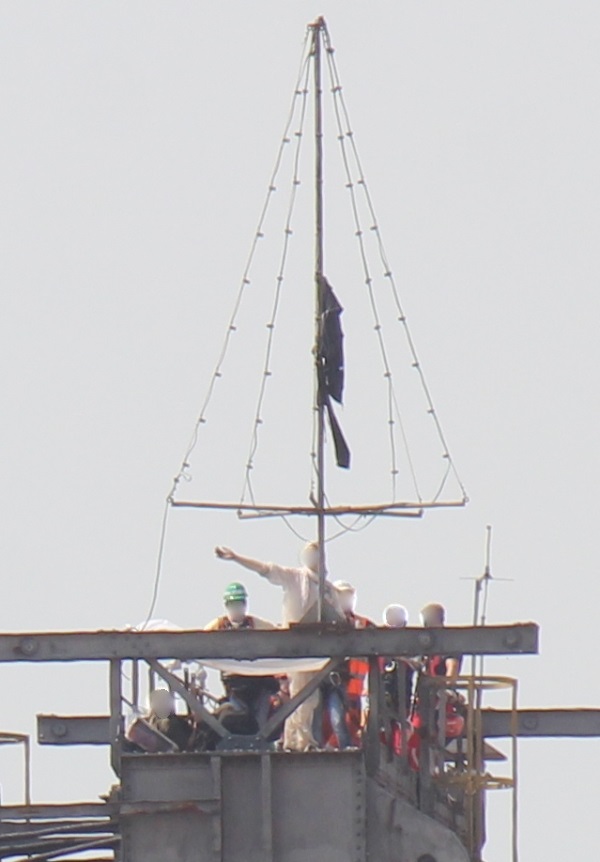 Four bucket wheel excavators in the open-cast lignite mine Hambach are occupied!

At the Climate Games in Amsterdam today countless playgroups make their moves. Team Blue (the police) and the team of industrial companies play their usual strategy: In Amsterdam they want to expand the West port for coal transshipment and in the resident companies they strongly contribute to the fact that the world’s climate passes several points of no return. Thereafter, the further warming would get unpredictable and irreversible. Our teams hamper them, as far as possible without being beaten by Team Blue. Their game objective is to enable a smooth flow of the work of destruction.
This year, a team in the Rhineland has stumbled over the fact that the playing field is not limited to the Amsterdam West Port. While it is folded by all sorts of boundaries together, but we can unfold and make our move at any time, anywhere – after all, the other side also works as good as anywhere in the world.

Our “new” expansion pack is the Rhenish lignite mining area between Aachen and Cologne. This industrial-scale clockwork (consisting of five power stations, three mines, a network of coal railways, tens of kilometers of conveyor belts and pipelines for pumped off groundwater) is the largest single source of greenhouse gas emissions in Europe – and in many places it is damn easy to attack for sabotage! A good man on this game board is the occupation of excavators: In the largest machines in the world, that destoy landscape around the clock here and produce coal, a lot of capital is at work – until we stop them! On the occasion of the last occupation, a spokesperson of the group publicly confirmed, that RWE can not stop actions of this kind in the future just because of the huge dimensions of the open pits.
The motto of this year’s Climate Games is “BIGGER, BOLDER, STRONGER”, and so we want to do things in style. Therefore, this time since 2:55 h we are occupying four excavators : The first as usual at the rim of the open pit, where now it can not swallow any more landscape for a while. The three other occupied excavators are at the bottom of the open pit: This means that in the Hambach mine, for the first time in the Rhenish mining area, among other things, the two coal diggers themselves are occupied! At least one person did not reach herhis destination and now supports others by bugging herhis warders of Team Blue. Heshe will certainly not be alone a very long time …

The game goes on – also in the Rhenish lignite mining area. From august 14 to 16, our friends of the Campaign “Ende Gelände“ (“end of the area”) mobilize to a mass blockade action in the Rhineland, and we are very keen to see what is about to happen around there. In october, a Skills Sharing Camp will be held again on the occupated meadow at the rim of the Hambacher Forst, which is acutely threatened by deforestation. And in December delegations of the United Nations gather in Paris on the question of how to talk climate change away, without changing anything in their exploitative economic systems – and, of course, many other teams are also there to play to unmask the lies. Make Your Move!

If you have got time and desire, we would be glad if you look in on the meadow to support the occupations and retain the ticker track of when solidarity is needed outside the police station!
Here you will find pictures of the most recent similar occupation of a single excavator. (Click in thumbnails to enlarge.) Pictures of the current action will follow here.

Please spread out the Action Statement (above) and also the press release and communication.

We hereby send you a press release entitled “Four bucket wheel excavators occupied in open-cast mine Hambach”.
You can reach us at the following phone number:

You are also invited to visit us for more information or sound bites at the meadow occupation in Morschenich. On our blog

incoming news are switched in a live ticker.

Düren – Last night 2:55h climate activists started again to occupie bucket wheel excavators of RWE. This time it were four excavators in the open pit mine near Hambach. Two of them are located on the bottom of the mine in depth 450 m, where the coal layer is. For the first time, the declared aim is to stop coal production. With the action they are protesting against the mining and burning (electricity production) of lignite and this way they offer direct resistance.

As with previous excavators occupations, the activists climbed up the stairs, ladders and walkways on the machines to the top.
At 70 meters high they installed themselves, with tarpaulins for sun protection, and they rolled out banners on which they demanded once more an immediate withdrawal from coal mining and a clearing stop in the Hambach forest. “It has long been known that the habitability of the planet is at stake. Is just as clear that there are alternatives to inefficient electricity production out of coal,” said an activist who wants to remain anonymous, and added: “An economic system that is dependent on constant growth, cannot do anything else than exploit the environment at the expense of us all.”
The action statement puts these occupations in the context of the “Climate Games” in Amsterdam. There, the West Port will be expanded, which is an important coal trading center. Via Amsterdam among others coal from South America is transported to the Rhineland to be incinerated together with lignite.

The action ended at 9 pm, july 4th, when the last arrested activists left the police station.

Neuland has been evicted!