Today exactly three years ago, about 15-20 people occupied the today (in)famous meadow on the edge of the Hambach Forest, accompanied by the press, after a press conference at the four-day evacuation of the first occupation in the forest. During the first couple of days, there were several attempts by the police to evacuate the meadow, but without success. 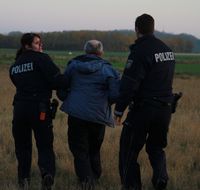 Once they even arrested the owner, Kurt Classen and led him away in handcuffs on the grounds that he would interfere with police operations, although he just wanted to show to the cops his ownership documents on spot. For this he was detained almost 2 hours in a police patrol car until finally the press showed up and was interested in his detention. Then the cops had to listen to Kurt Classsen and as a result to inspect the meadow with flashlights (in the meantime darkness had come), only to find out that we actually were on his land and they could do nothing.
Another time the police arrived with heavy equipment of RWE and destroyed the first provisional buildings, on the grounds that we had wood out of the forest, which is owned by RWE, and so we had stolen it.
In the following days, many people came and helped us to build the first part of our actual kitchen, even leaving their names and phone numbers on papers in the kitchen for the police, to prevent that they just would destroy it. Kurt Classen convened a meeting in the pub “Hoven” in Morschenich, in which he invited everyone to comment on the protest camp, in order to get an idea whether it was welcome. About 40 people appeared and the most common view was that we should be left in peace there.
Generally the support and the solidarity by the population from the immediate and broader environs was overwhelming. Many came and brought us food and warm clothes, and anything else we needed. Before we were able to cook for ourselves, there were even some unbelievable nice people who set up a schedule, who would cook and bring vegan food for us and even take the dirty dishes!
I remember a father who told me enthusiastically that he actually would eat everything but thanks to us he had dealt for the first time with the topic of veganism and the suffering of non-human animals from the exploitation by people and that he really was shocked. Since then, they mostly would eat vegan, which did him physically much better, as he told me with great joy. There were also people who thought it would be already too late to resist, but still found it great that we kept fighting. They felt it as a practical solidarity towards them, that we focused at least a lot of attention on the injustice that was done to them for decades. Some supported us anonymously. Within a week we had a usable kitchen and two to three site trailers and caravans where we could stay protected against icy winds a and warm up thanks to the furnace.

Many thanks to all those who supported us in this difficult first stage! Without you it really would have been hard to stay and only with you this place has become what it is today.

The first winter was the coldest so far in the four years of offensive resistance. At -16°C (60.8 °F) a few activists were standing by the camp, sometimes only three or four, while they had to deal with and to digest their experiences during the evacuation of the first forest occupation and the subsequently obtained injunctions from RWE.
THANKS TO ALL WHO STOOD BY AND REMAINED!
Nevertheless, the meadow grew. Infrastructure was created and it became a meeting place for all those who do not agree with the destruction caused by the lignite mining. Since then there have been many attempts of various authorities to bring this important place of encounter and exchange to naught. But although there were already processes and judgements, Kurt Classen, with his super tax advisor court and laws knowledge power and especially with his resolute perseverance, just manages to stop them again and again! I’m certainly not the only one whose full respect, admiration and gratitude you deserve by doing this! THANK YOU KURT! I hope you will continue to show them whom future belongs to!

SOLIDARITY TO HAMBI & THE RESISTANCE FROM PONT VALLEY OCCUPATION