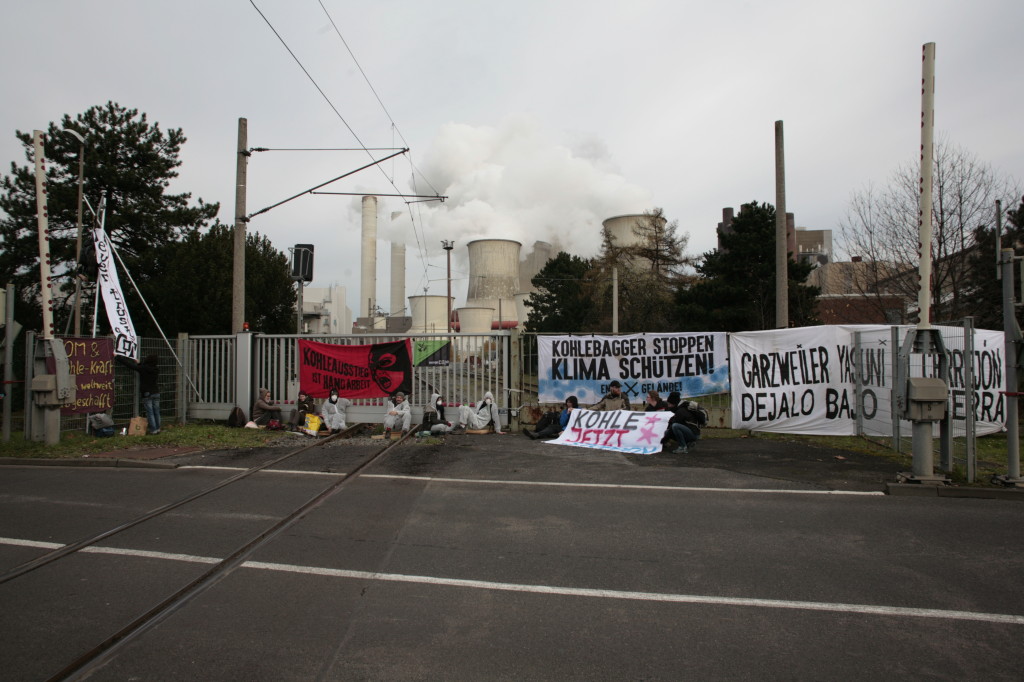 With a tripod and a sit-in, activists of ausgeCO2hlt blocked an access road to the coal power plant Niederaussem by 1:00 pm in the Rhenish lignite mining region. 20 activists chained themselves partly in lock-ons to each other, they partly fixed themselves in the tripod itself. The action is directed against the mining and electrification of lignite in the the Rhenish mining area and worldwide.
“The Rhenish lignite mining area is Europe’s largest producer of CO2 emissions. Here is decided on the climate and not at the negotiating table in Paris. Climate change means for us an immediate exit of Germany from the particularly climate damaging lignite. Only by a final shutdown of power plants we will mitigate the human-made climate change. That is why we have today blocked parts of the coal delivery in one of the biggest and dirtiest power plants in Europe. The action fits in to the Rhenish resistance history of camps, occupations and blockades in recent years. In addition, it takes place simultaneously with an action of our friends of “Ende Gelände” in the Central German lignite mining area. We are anywhere and will not stop until the destruction will be stopped,” says Milan Schwarze, speaker of the activists.
Not only in Germany the environmental movement is growing for some years. All over the world we see that people increasingly take action against fossil fuels. During the climate summit in Paris all demonstrations are prohibited. Nevertheless, small or large actions within the scope of the Climate Games currently are taking place again and again. These games are a creative action laboratory in which participate more than one hundred groups from all over Europe. Today’s blockade actions of the activists in the Rhineland and in the Central German mining area are part of these international Climate Games.
“Our actions are also a sign of solidarity with the people in the world who are already affected by the consequences of climate change and are forced to flee. Therefore we do not agree with the 2 centigrades target, which makes the present misery invisible and locates the problems in the future. We call upon all people to judge their actions by reality, which tells us that there is no time to lose – we must organize now against the sale of the world,” Milan Schwarze said. “For us it is not just about a change of energy, but also about the gigantic energy requirement of the capitalist economic system which is based on growth. Only by overcoming these conditions, we will achieve a good life for all people in the world.”

„We oppose all this shit“ Interview with the EarthFirst! Journal