RWE stockholders meeting 2016 in Essen (Germany) was met with outside protest and constant inside disruptions by over 70 activists from groups ranging from Fossil Free and Greenpeace to groups and projects engaging in anti coal blockades and direct actions such as Hambacher Forest, Robin Wood and Indigenous Groups from Siberia resisting the eviction of their villages by coal mining projects linked to RWE. The protests and actions started a day before and during the night with stencils on the pavement and walls around the headquarters of RWE and the convention centre. During the morning tables, banners and inflatables were set up outside of the entrance to the convention hall that was being guarded by both local police on the outside and private security firms inside. Approximately 40 activists got inside as part of the Critical Shareholders action to be at first met with pat down and metal detector searches followed by a large dose of green washing displays and presentations. All the computer stations containing RWE propaganda were promptly redirected to the home page of the Hambach Forest occupation http://hambachforest.blogsport.de/information-about-the-forest/ and remained showing an eco/defense response to coal mining info, attentively read throughout the meeting by stockholders, next to RWE employees happily handing out corporate schwag. Before the actual meeting begun, the setting was rather surreal with activists connecting and taking Virtual Reality tours of RWE coal mines and its diggers, as waiters served drinks to an older and more conservative demographic all around.

An activist is led away by riot police

From the very beginning of the meeting and commencement speeches, the disruptions begun with several protesters jumping on the stage and unfolding banners, followed by others unfolding larger banners and chanting antiCoal and Climate Justice and pro Hambach Forest slogans. One protester locked himself with soft lock-ons to the railing close to the podium and was slightly injured when the security tried to forcefully dislodge him, another protester was also injured by sustaining bruises on her leg. Some of the stockholders also attempted to assault the protesters by pulling their glasses and cameras and yelling insults while others insisted that they be allowed to protest. With over 25 protesters being taken to a holding room under the stage, the atmosphere turned more festive as confetti flew, and no one watched the official live feed of the speeches provided on a monitor showing close ups of the faces of the speakers only, yet still punctuated with many additional pauses full of consternation as other protests and disruptions raged on and the ranks in the the holding facility continued to swell. All detained in the convention center were eventually released. Another group which succeeded with a climb of, on this day heavily guarded, RWE Tower and a banner drop was detained for several hours and then also released.

This year meeting had very little to celebrate as RWE for the first time in over 60 years suspended its dividend payments to ordinary shareholders, announced its plan to cut 2,000 jobs over the next two years and predicted that its rating will be lowered even further due to their nuclear waste storage remaining from shut down atomic power plants. NO dividend this year will especially affect many cash-strapped local municipalities in north-west Germany with combined stake of around 24 percent in the RWE group which have remained immune to the message of the vibrant DeInvest movement, the global irreversible effects of the coal mining industry on the climate and on the general health and well-being of the global population and its horrendous effects on biodiversity.

The sinister overtone of the convention were numerous statements by the members of the board that the turmoil facing conventional energy companies could have devastating effects as it leaves to back up capacity to balance rather “shallow and unreliable” renewable energy. They call it a “horror scenario”, a term rather descriptive of climate change and chaos on the brink of which the world finds itself, due to action of climate criminals such as RWE, topic obviously missing from the speeches but not from the protests. Thus the above mentioned corporate energy apparatus induced paranoia and verbal gymnastics could hint to the possibility of government financed bailout and even more intensive pro fossil fuel subsidies. It remains more important for the Climate Justice Struggle to keep up the pressure through diversity of tactics and protests such as this one. 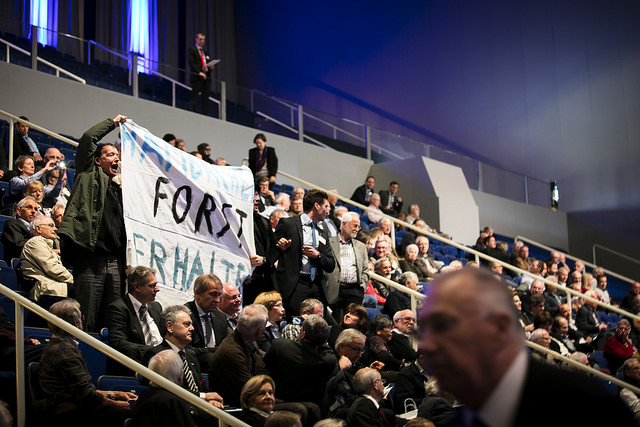