News, last ones on top

⇓ January 30th
15:30 pm One person was arrested during an identity check at the railway station of Buir. According to police statement, they is in custody. More information on the arrest.
11:45 am Two police vans standing at the Deathtrap (= treehouse next to the tripod at the entrance of the forest, on the side of the forest parking area, at the Secu-bridge). Attention: the cops are taking pictures.
11:30 am Still high police presence. Keep your eyes, ears and mouth open and let us know if something happens.
09:15 am Workers are sawing logs on the open pit side of the former A4, near the Secu Bridge.
⇑ January 30th

⇓ January 29th
6:45 pm The passengers of five police vans removed damaged street signs at the Deathtrap. They now move toward Buir.
4:00 pm Two police vans at the bridge over the new motorway near Morschenich. Police patrol with 5 vehicles on the road. At the station mainly security guards. Many guards in Buir. Between here and the right Secu-bridge two police cars.
1:15 pm High police presence around the Hambach Forest, at the “Deathtrap” and the railway station of Buir, maybe there are controls. Take care of yourselves, don’t put up with anything, and keep us up to date!
⇑ January 29th

⇓ January 28th
5:00 pm Currently police carries out identity checks in Morschenich.
Eyewitnesses report: “At that moment we were en route in and around the forest. In Buir itself security cars and a police patrol were circulating. On the road to the former A4 two police vans came in our direction. On the bridge next to the former approach road were at least 4 police vans. When we photographed on the other bridge, where the people were struck by the jeep, a police van came up behind us. About 5-6 cops with helmets and batons got out, first came to us, but walked past us, when they saw that we wanted to return. Going back to Morschenich, we spotted a well-staffed police van at the crossroads. Four people, who probably had come from the meadow, were controlled. It was allegedly a “general security check”. However, not only their papers were checked, but the people themselves and their clothes and bags as well and a mobile phone was reviewed on “legality”. In addition, a car was checked for warning triangle and first aid kit. In the middle of Morschenich two police vans were at the bus stop and controlled. At the railway station someone of the railway security was walking around, but this may have been a coincidence. The behaviour of the police was aimed to intimidate. Take care of yourselves, but don’t let it get you down!“
2:45 pm The police drove away again from the hangar. Currently there is increased police presence in the area around the forest, which is expected to remain so for the moment. Please be careful!
2:00 pm Five police vans are at the hangar and are just starting to move toward meadow.
→ Correction: Five police vans have gone to the hangar, and are standing there around.
⇑ January 28th

4:30 pm Nine cop vans seem to have gone away for now
3:50 pm Approximately 8-10 vans are stationed behind the bridge (towards the open pit) and police patrols drive around. Interested people near the forest car park are sent away.

2:10 pm Three cop vans are just appeared at the forest entrance at the former motorway approach road. Their content got out.

5:45 pm The police checks are terminated.
4:30 pm Police checks in Buir near the highway bridge at the station. Perhaps until tomorrow morning. It is believed that activists should be picked out. Take care for each other and keep us up to date.
3:00 pm The police is no longer in the forest.
1:50 pm Police have retreated to the big bridge with the Secu-HQ.
1:00 pm About 30 cops are in the forest. They were at the Tripod / Deathtrap, in Oaktown. Now they move on the main road in the direction of “Pizza”. According to police, it is a pure intelligence measure. Keep an eye on the ticker and take care of yourself.
Edit: We wonder if the police misunderstood our appeal: “WE URGENTLY NEED PEOPLE IN THE FOREST! Come over!!!” We don’t know. 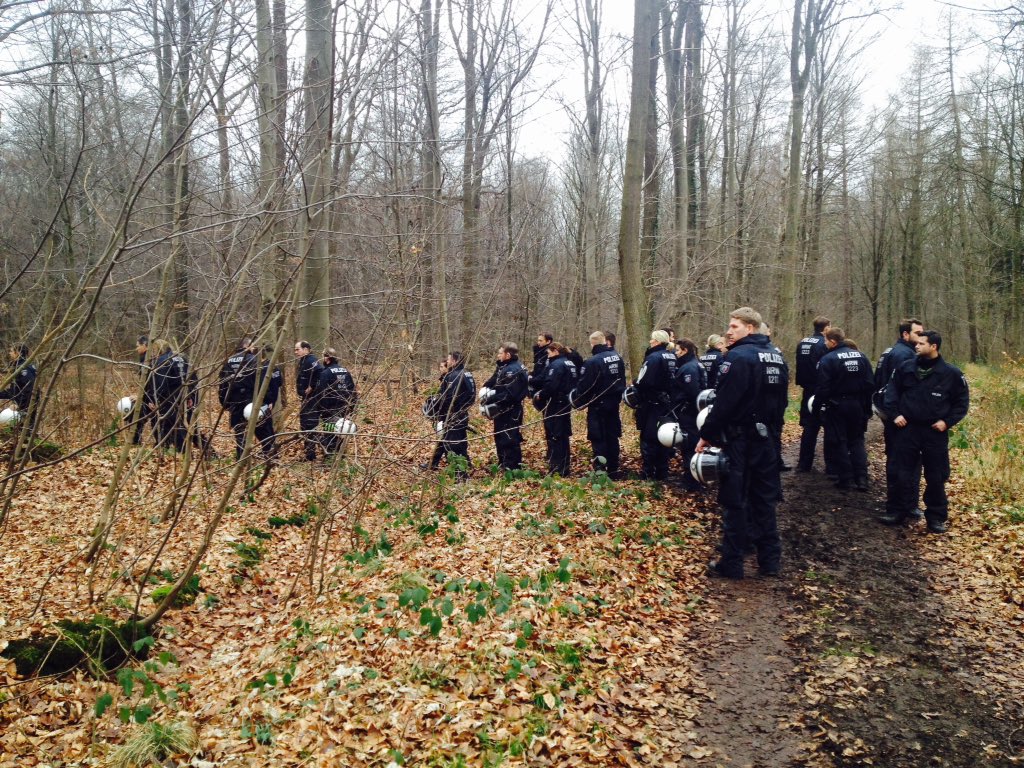 5:00 pm Nine police vans have been spotted on the road between Buir and the motorway bridge. There they were looking at maps with some security guards.
It is likely that in the next few days a major police campaign will be conducted. WE URGENTLY NEED PEOPLE IN THE FOREST! Come over!!!
⇑January 24th The forest walk guided by Michael Zobel was now better attended than ever. 267 participants took part. The next guidance will be on February 14th.

10:00 pm The highway is barricaded as ever. Was all just a dream?
9:00 pm The machines have left the forest.
8:03 pm The barricades on the highway are now almost cleared. Until now there were no confrontations.
7:30 pm Currently a bulldozer, police cars, a fire truck and several jeeps of the security service are moving on the ancient highway to Morschenich and remove the barricades there.
6:30 pm At the railway station of Buir, several people were stopped by the police. Some patrols, including plainclothes cops, carried out “suspicion independent” identity checks. One or two people were taken into custody. There are also vehicles of the security service on the road.
⇑ January 23