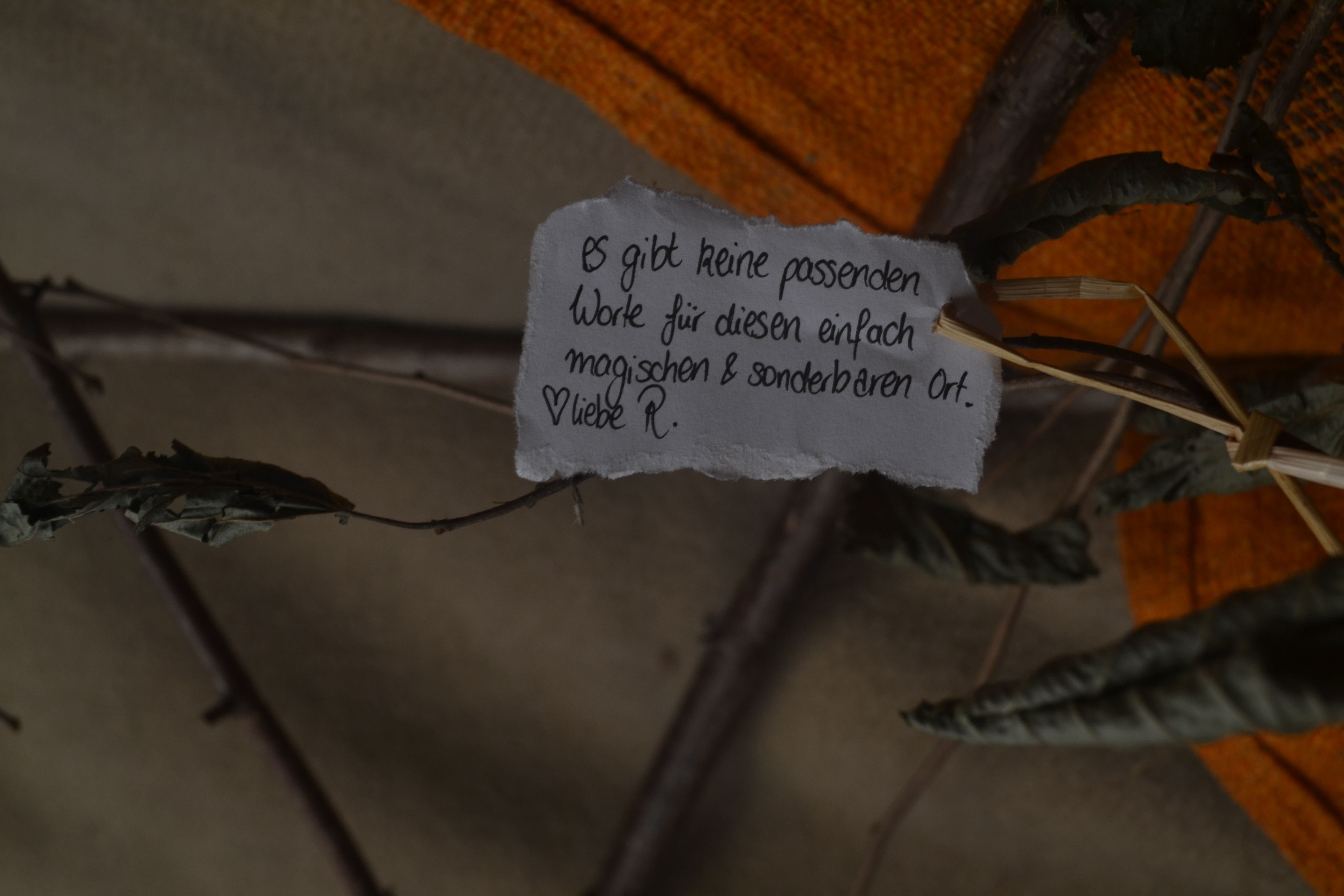 There are no appropriate words for this simply magical and strange place. ♥ love R.

I am often asked what I’m doing all day – up there in “my” tree house in “Oaktown”.
Well, mostly I’m not up here all day, and I do my things like almost everyone else – on the ground. If – like now – it is necessary that the tree houses are occupied during the day, my life relocates into the treetop.
Although my life may seem extraordinary from the outside, and some may think that I’m just doing weird things all day, I spend most of my time with the same “normal” things like the rest of the world. I just cooked something, for example – on a camping gas stove, one of the most useful things that are up here. I have got a rack with spice jars, pots, a cutting board and all sorts of food that I store mainly canned and jarred so that the birds and the dormouse (who soon will stop hibernating) can not eat it all away. The tree house has three platforms. I spend most of my time on the top level. It reminds me of the hiding places that we built as children. The roof is made of hazel branches that are bent into a dome. It is covered with colourful blankets, straw and tarpaulins, so that it remains dry and a bit warm indoors. At some points the straw protrudes from the walls, making the room seem a cosy nest. Perhaps the tree house also therefore carries this name. 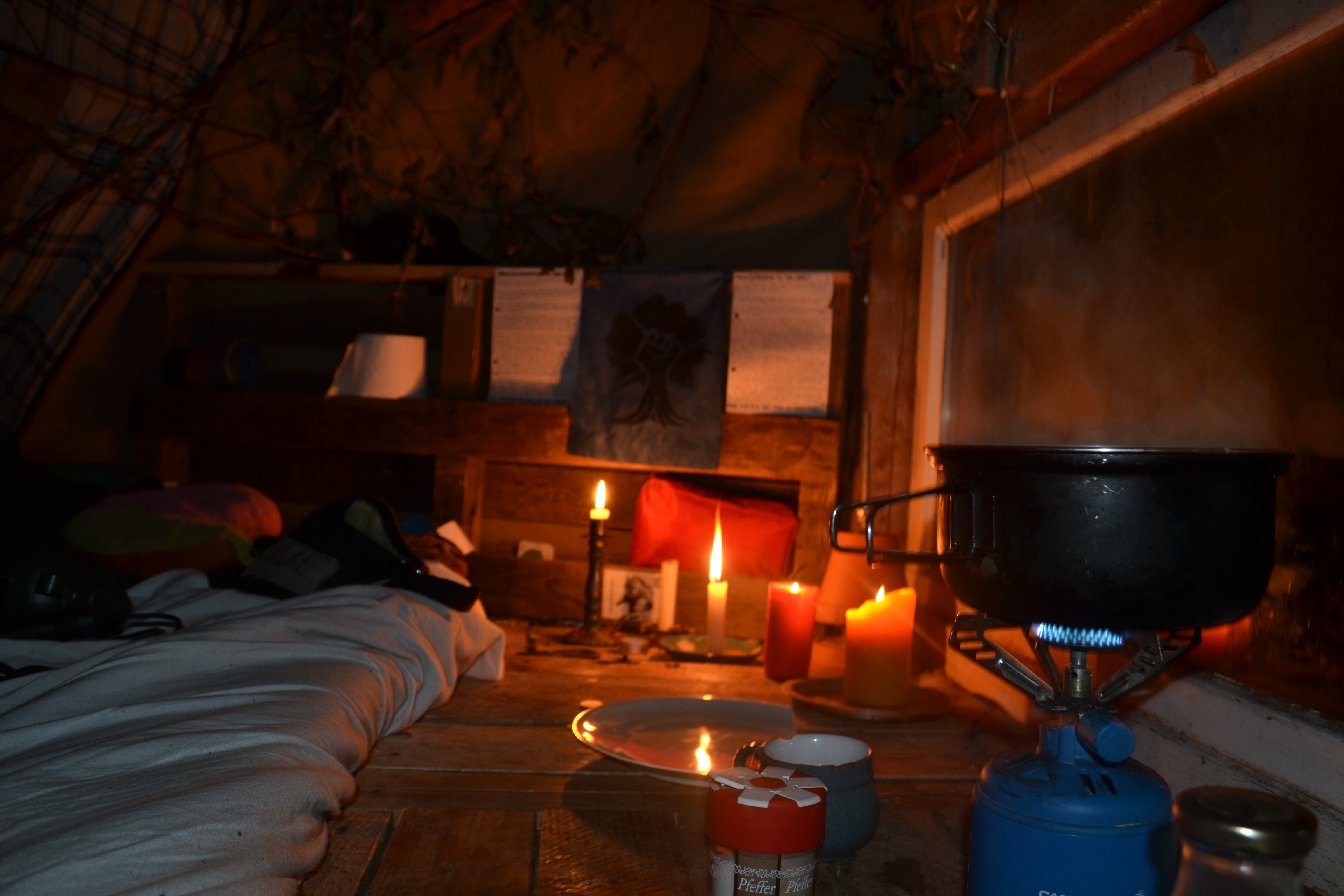 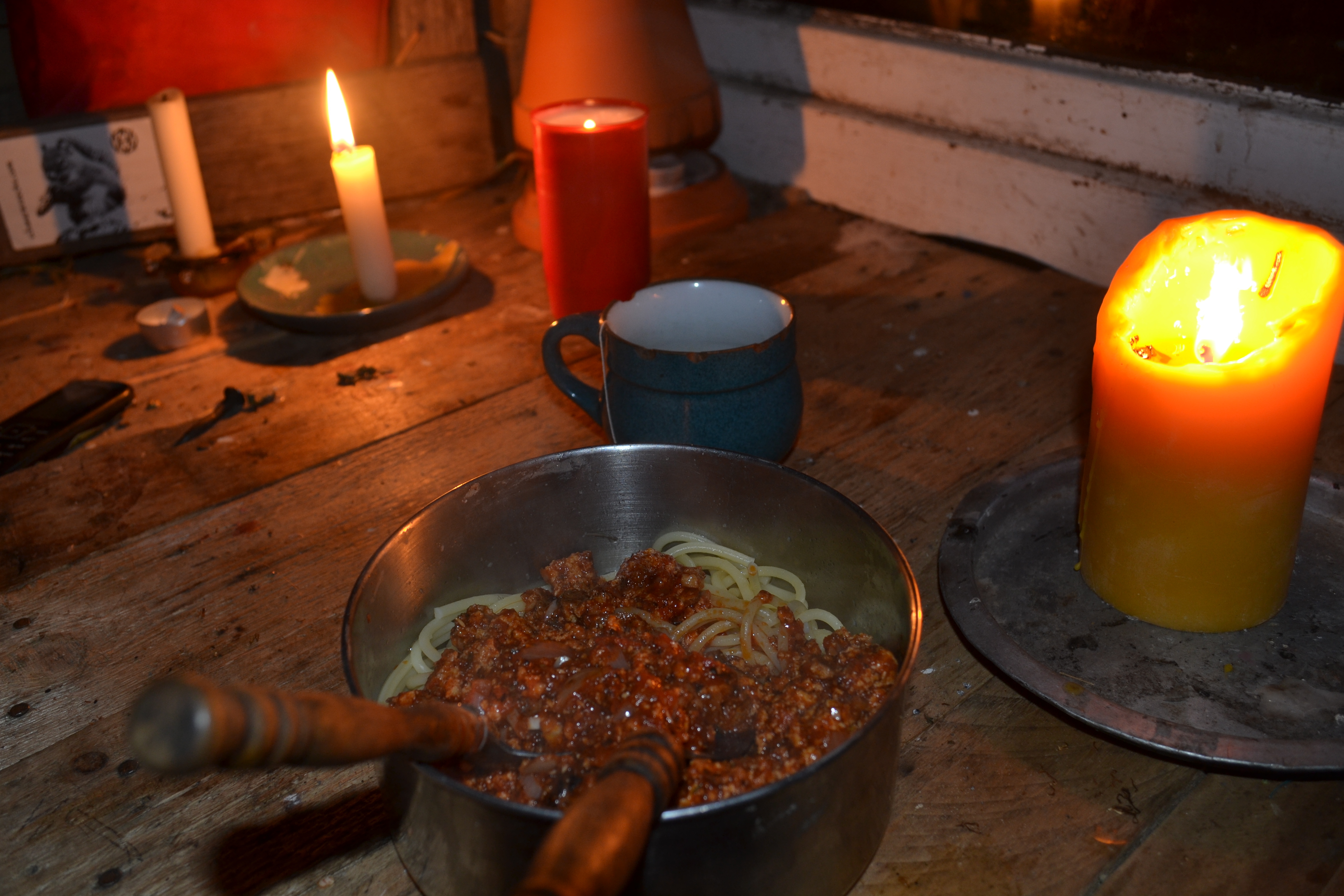 There are also windows – one large and one small, which I can open. In the morning I can look out of the bed the sunrise over the treetops through these windows, and during the day the forest life. Through these windows I already saw tits, woodpeckers, geese, pigs and deer and sometimes helicopters. They also belong to my image of this forest, like the loud noise of the machines next door that tear open the old motorway and the noise, the moaning and buzzing from the open pit, which sometimes sounds like a lament, which that excavators chant, that dig off millennia old layers of earth there. When once again some of these gigantic machines are serviced, I am quite irritated by the silence that is prevailing then here because meanwhile I have accustomed myself to the noise.
I have spent a lot of time in this tree since I came eight months ago into the Hambach Forest to live here. For almost five days, I’m more or less continuously here and leave the tree only when I visit one of the neighbouring tree houses or sometimes in the night to get a bit of movement on the ground. 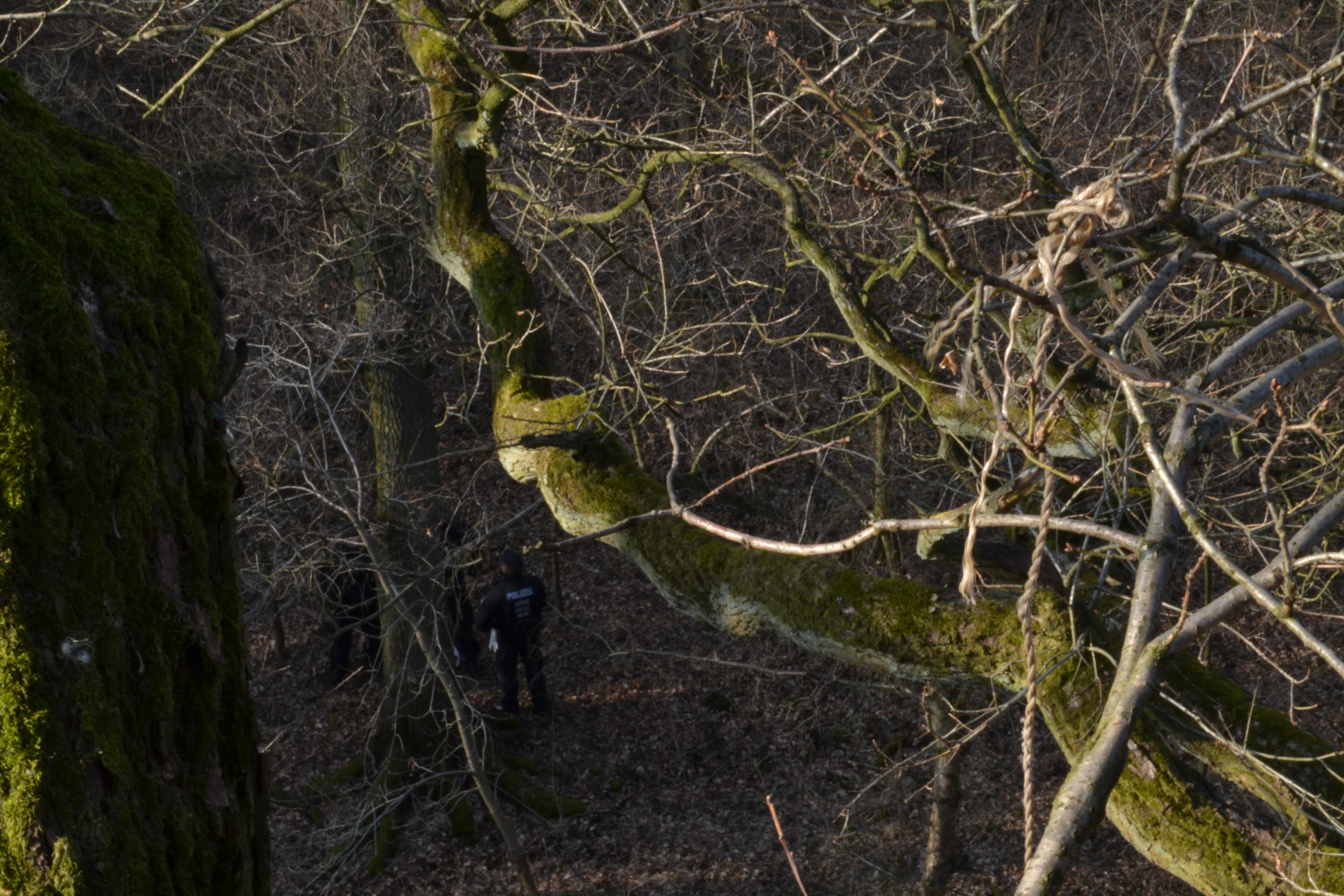 After all, the situation here has changed, as they galloped into the forest on Monday removed all barricades along the forest paths, destroyed some tree occupations and cut down trees, we wanted to protect these. You – this is the mess made of police, security guards of RWE and people in large machines – harvesters, wheel loaders and chain saws – machines for destroying and flattening.
Twelve hours – from seven in the morning until seven at night – up to ten cops were with me under the tree. In the first half of the day I expected an eviction and began to prepare myself for this – packing my eviction backpack and gathering power for the next few hours that will not be the most pleasing of my week in any case.
About noon I heard, that the cops do not intend to evacuate us. But they did not want to reveal what exactly was happening around there in the forest, anyway, it was as if the forest occupation and the meadow had been encircled to prevent us from taking any action against “Whatever they are doing”. The rest of this siege I was very upset. Feelings of relief about not being evacuated mingled with anxiety about what was going on in the forest. With the people on the neighbouring trees I was in contact via a walkie-talkie, we danced together on our respective balconies, allowing us an occasional joke to the cops or were silent together when anger or helplessness with regard to the destruction around us robbed us the power for anything else. And yet I felt isolated. It was not until it was completely dark, when we heard howling of wolves from many voices under the trees – people who came to pick us up – for us the sign that the terror in the forest had come to an end for this day.

On my way to the meadow I hardly recognized the previously so familiar forest. The overgrown forest roads, blocked by barricades, on which I had felt hitherto so safe and well, had been transformed into wide forest roads where now by day is patrolling police. Not only barricades, other landmarks have now disappeared as well, for example, a puddle that was my favorite puddle, because in the darkness I thanks to her never missed the entrance to the nettle field – a shortcut between Jesus Point and meadow. I felt like blind when I walked along this new, flattened road the first time – my senses now have to get used to a new environment and a new situation.

The next two days I spent paralysed in the tree. Periodically police vans drove on the forest roads. Since the trees are permanently occupied, so they can not be simply cut in our absence.
They have taken away our forest away, the first place where I felt safe and free and that has become to me no longer just a place of resistance but in recent months such a thing as my home.

Also this day I spent in the trees, together with the people with whom I currently hold occupied this tree city. From above we could see what is happening in the forest. In the morning barricades were removed and holes were filled, which were built and dug the night before. In the afternoon a walking group of cops came through the wood, their regards directed to the ground. What did they want to collect? Probably no leaves or branches for crafting and decorating or mushrooms, as normally people would do who walk in the woods,.
We ate pudding and pancakes and greeted people who walked through the forest, because they are happy here and not because they want to monitor us, the potential threat.

I try to make my time up here enjoyable, but I am under a constant tension. Each bike I hear sounds like a chainsaw to me. Each rattling of the engines on the motorway sounds like a helicopter, announcing the next major operation.
I have become painfully aware that the forest in which I am, is under serious threat. Threatened by profit-hungry people who would tear every last blade of grass on the planet, in order to promote economic growth, while destroying the real growth in our world.
A forest of thousands of years, which even survived wars must make way for a bit of electricity, which mainly does not flow in bedside lamps or refrigerators, but in its own production and the production of things that we do not need or even cause damage – like the umpteenth generation of the iPhone or weapons of war. I’m not just here because I want to protect this tree or the forest in general against the exploitation by RWE, but because I have got the bigger picture in mind.
We cause harm by our way of life, by exploiting the labor of people, fueling wars and by destroying habitats. While we drown here in our self-created abundance, more and more people become ill and unable to act and suffer from burn out and depression, because they no longer withstand the pressure to perform and to consume, people die in other parts of the world from malnutrition, they flee from poverty, war and climate change – all things that we create and support by our life style.

I want to interfere, to inspire others to question their thoughts and deeds and to participate in the decision whether we want to preserve or to destroy this planet. To enable survival on Earth, we also need functioning ecosystems. Nature can not be operated artificially with electricity or bought back with money. If we destroy it, we destroy ourselves. Sooner or later we will stand helplessly in the face of this knowledge if we do not start now, to radically alter the way we live and how we affect other life.
We do not yet suffer the consequences, which causes the way we are dealing with the earth up to now. We guess them only when in winter the snow fails, when prices are rising and we read in the news more and more often about war, disasters and corruption. But we are running out of time, for much on earth it is almost too late to be saved.
Tomorrow I will be here in this forest too, and also the days after, to put myself in the way when again trees are to be cut and habitats to be destroyed in order to keep running a part of that enormous, destructive machine.

So when I am asked what I do all day up there in “my” tree house, then the answer is: I think about ideas how to make the world a little less shit and I’m waiting – for the right moment, to implement these ideas.
Now when I look at one of the neighboring tree houses, which is illuminated by candlelight, I am consciously grateful for and proud of the people who are here with me.
Every heart is a revolutionary cell. My heart is now with this forest and with the people who defend it with me. 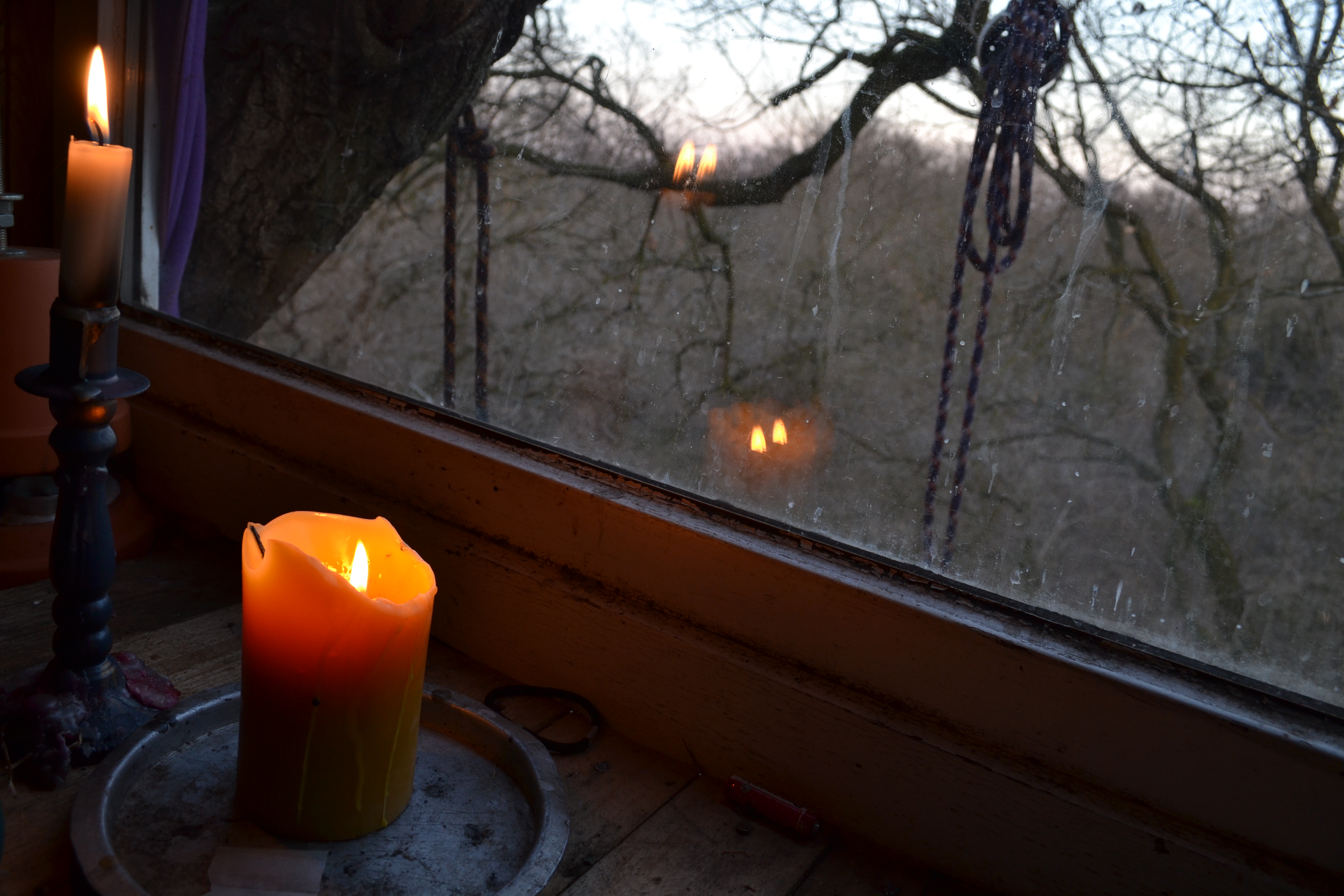