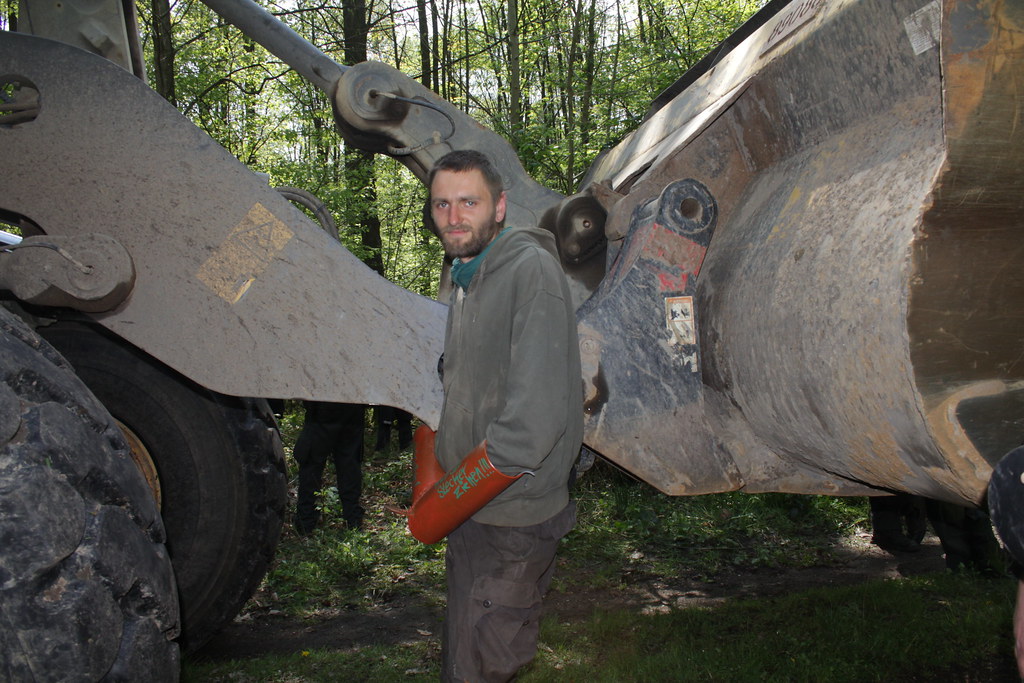 Düren District Court has now set the trial date for the hearing concerning the actions that took place during the Compost Toilet Eviction over 2 years ago. The date of the process will be the 14th of March in Düren.

Background: During the Skill Sharing Camp of 2014 over 50 riot cops and several pieces of equipment from RWE entered the forest to clear barricades and remove the compost toilets. This action was blocked for many hours by activists locking themselves to the bulldozers, frontloaders and by climbing into the trees in front of advancing equipment.

This trial is reflection of the current trend in the Rhineland of pressing charges against activist who lock themselves to, or block the heavy equipment. It is an attempt to prevent them from engaging in future actions. For this reason lets not forget about those who are being prosecuted and express our solidarity in person and remotely.

Personal Controls have been announced for this trial, meaning that all persons and belonging will be searched and personal information taken in order to enter the courtroom. For those not willing to comply with this there will be the usual outside the courthouse support action with banners, food and info.

A group of police is advancing through the forest. It’s the 23rd of April 2014 and their mission is this: the eviction of all compost toilets! On their way they are repeatedly stopped by people climbing onto their machines, errecting wooden barricades, or locking themselves onto the arms of a frontloader. This stops them in their tracks for multiple hours. At the same time the SKill SHaring camp is going on in and around the Hambach forest. Three weeks earlier police had evicted the tree city Monkeytown. Two days after the toilet action, the forest is reoccupied. The tree house towns of Oaktown and Beechtown were founded and were joined by Gallien and Crustitown in 2017.

Videos:
Monkeytown in February 2014
Toilet eviction
Reoccupation of the forest

What happened in October 2014?

It’s the 29th of October 2014 and again there are blockades of that years’ cutting works. A shredder is blocked by an activist climbing the machine and locking themselves to it. Hours later they are arrested and dragged to the police station in Düren.

In the days preceding these blockades it came to confrontations between the forest workers and the opponents of destruction. On the 30th of October Police evicted the tree occupation “Grubenblick” after physical aggression between security personnel and forest defenders. Later on the same day the police searched through the meadow camp adjacent to the forest. A total of 24 people are arrested and report of abuses in police custody, fixations and the cutting of hair. One person is kept in preventive custody.

Video of the blockades of the destruction works october 2014

other court cases in the next weeks:

Two dates for the Ende Gelände 2015 court case have been announced:

The public is invited to all court cases. Drop by, start solidarity actions and take photos…
Watch out for further announcements!

Camabaran, France: Communique from the MaquiZAD – on the recent roadblock

Blockade of the Hambach Railroad by Hambach Forest Activists