Current Infos on the Lebenslaute concert at the Hambach open pit mine <!–Lebenslaute-Konzert am Hambacher Tagebau–> Map 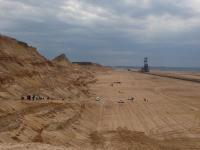 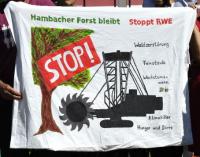 03:00 am All are free, except Jus
02:20 am Two people released in Bergheim, one person remains in safekeeping for the ID treatment
01:20 am The whereabouts of the people who presumably already are evicted is still unknown.
11:05 pm Lifting platform just moved out.
10:40 pm Lifting platform in the mine to remove three people, to whom it is hard to aproach. Excavators and conveyor belts stand still.
10:20 pm First person released in Bergheim.
10:10 pm The event is finished unanimously. The people decide to leave the pit all together. The technical unit (police) enters the mine. The whereabouts of 3 people within the mine at a deeper level is unclear.
10:06 pm They stopped the gathering and they are leaving the mine in one group. The Police seem relaxed.
09:55 pm The choir is still singing.
08:54 pm RWE made the offer that if all people left voluntarily they would not have to show their IDs.
08:40 pm People have left the conveyer belts
08:00 pm 9 people are dancing on the conveyer belts. The music is still playing and the people are being kettled by the Police.
07:47 pm 8 people are dancing on the conveyer belts.
07:40 pm Police bring 2 eviction tanks and large light beams to the blockade.
07:20 pm 3 people go on a level deeper into the mine, surrounded by Security and Police. Due to them, the digger and conveyer belts have stopped.
07:11 pm Lebenslaute proclaims to be in solidarity with people in the struggle figthing with police repression
06:34 pm The concert is running well-there are dancing people on the conveyer belts.
06:12 pm First arrest in the open cast mine
06:00 pm 4 people go into the mine, followed by Security.
06:00 pm Lebenslaute concert, Andante at the edge „Andante an der Kante“ in front of RWE digger has begun.
05:50 pm Orchestra assembles and instruments are being tuned in front of the digger
05:45 pm Lebenslaute (name of the concert group with choir and instrumentalists) squats a part of the RWE-opencast mine near terra nova (viewing platform by RWE): a few people are walking on the conveyer belts!
05:15 pm Thanks to Lebenslaute!
04:30 pm Conclusion: It was a very beautiful demo. Due to the massive presence of the Police, protestors could not move on to the RWE terrain. Maybe it will work next time!
02:40 pm concert officially ended
02:30 pm closing concert with waltzer dancing people in front of poilice line. Good mood, it’s windy and dusty.
02:00 pm Four rows of police on the left side (towards mine). 27 police cars around. Situation calm. Vocals prepare concert.
01:00 pm Demo halts after 200 Meters, because the way is too narrow. After a compromise they continue: Police agreed to leave more space.
00:42 pm Demonstration proceeded 100 meters. Presse is present (graswurzel,tv, taz, WDR). Police has green clothes (no battle gear).
00:35 pm Demonstration has been circeled contrary to prior agreements by police wearing black and white cable ties openly.
00:30 pm 200 visitors at the concert with speeches. Now the demonstration starts.
10:00 am Scouts report that two diggers and conveyor belts are held by RWE.

Chillum – Photos from the Tree House

Tree occupied at the edge of the clearance