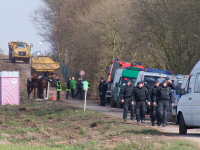 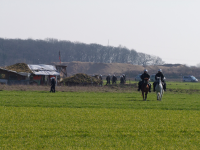 Kerpen/Buir. On Monday morning, 03/14/2016 at 7:00 am, the protest camp in the Hambach Forest near Morschenich (between Aachen and Cologne, Germany) and the nearby forest occupations were temporarily surrounded by police forces and security service.
During this operation, several hundreds, equestrian and dog units as well as heavy police equipment were on duty. Furthermore, employees and machinery of the energy group RWE were involved.

On March 14 and 15 2016, the barricades were removed from the forest roads. At the same time these forest roads were widened and covered with a thick sand-gravel mixture in order to enable large vehicles and police cars to enter seamlessly the Hambach Forest.

For more than four years, activists are occupying the Hambach Forest, amongst others with tree houses as forms of blockage, in order to obstruct the clearing work.
During the operations on March 14 and 15 three tree occupations were evicted (at the time of the evacuation they were not occupied) and a tunnel in the disused landfill near Morschenich was destroyed. There have been no arrests, but numerous restraining orders were imposed in order to prevent intrusion into the forest for a smooth running of the destruction of the Hambach forest.

The cleared, massively widened and levelled forest roads allow the police now to patrol in the middle of the Hambach Forest, because their vehicles always can get anywhere.
“Thus the refuge areas of the forest inhabitants are strongly reduced. Police and RWE have taken a significant step towards escalation, although they allegedly tried to de-escalate,” says climate activist Heidi Berg.

All this after the grubbing season, which is limited in duration to protect the survival of some rare species in Hambach Forest and considering the Skill-Sharing Camp, which will take place in ten days (March 25 to April 3), and the annual Climate Camp in summer.

On March 14, Ralph Jansen reported in the Kölner Stadt Anzeiger, that obviously a call by RWE is sufficient and make police coming to provide assistance.
Whereas the activists in the Hambach Forest are accustomed to quite a different way of dealing with the police. Heidi Berg says: “Once again it became evident how close RWE and police are and who is holding the threads in this region”.
We do not want to make unheard demands to the political class, who are responsible for the destruction of the Hambach Forest. Instead we will face these hostile and destructive technologies, in the Hambach Forest and everywhere else, and fight for solidarity and a peaceful, equitable life for all life forms and we will build spaces for this.