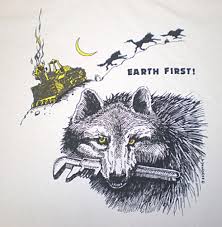 On the night of the 5th of January I paid a visit to the Hambach open cast browncoal mine close to Aachen. My goal was to destroy the railroad tracks with a load of thermite I stole from an other industrial company.

I chose the location so it would hurt them most, at the part where the train can switch to the other track since this part is one of a kind and they have to make a new one on site.When I got there I set everything up after checking the target and my escape root, the termite I put in 2 plant pots with holes in the bottoms to guide the molten mixture to the right place. The stuff is easy to ignite with sparklers, which you can get anywhere around new years, but to be sure it all went up I put around 20 in each spot. I placed the device and set it ablaze.

Just in the moment I lighted the 2nd one I saw the headlights of a train coming my way. I had plenty of time to get some space between me and the molten mixture and watch the train driving into one of the pots. The tracks and front wheel were covered in the burning thermite and making a repetitive noise of the wheels hitting the damaged spot.
After one last look at this spectacle I got my ass out of there.